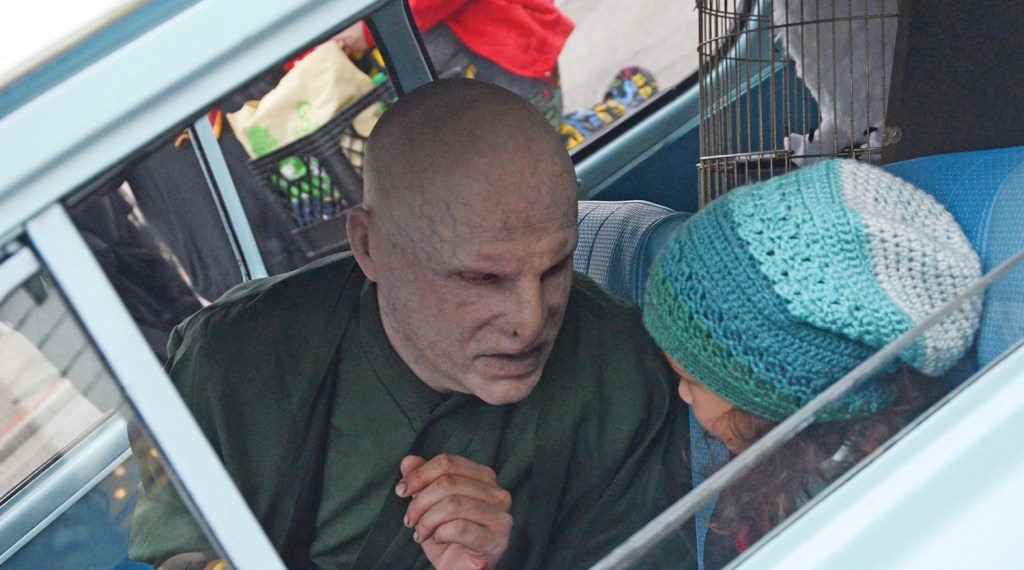 A professional cosplayer from Cos-Ohana, dressed as the villain Lord Voldemort, interacts with Mali Vallance at Ironton Wizardfest in 2021. (The Ironton Tribune | Heath Harrison)

Potter fanfest expanding  into another building

When Wizardfest returns to Ironton in two weeks, Harry Potter fans are advised to be on the lookout for things that may not be easily found.

“It’s going to be bigger than it was last year,” said Brad Bear, one of the organizers of the event. “Not only in terms of ticket sales, but we have expanded the footprint of it.”

He said there is a lot of energy going into this year.

“It has only been a year since the last one, so people are very excited,” Bear said. “And we are excited to see everyone come out and play again.”

This year, there will be events in the Ro-Na theater and the City Center and for the first time, they will be taking over the Brumberg Building where they will have wizard classes and two escape rooms.

“We are taking a little more of Ironton to accommodate the fans,” Bear said. Last year, well over 5,000 people attended.

Bear said all the fan favorite features are back this year including Myrtle the flying Ford Anglia, BARKer Farm is bringing its menagerie of exotic animals, Briggs Library will be doing crafts with kids, Ohio, Kentucky, Indiana LEGO Users Group will bring their expanded Harry Potter set, a ton of cosplayers, HoggsTown will once again have their immersive wizarding school, the broom maker and of course, the ever-popular Butter Beer Brew.

“And we are bringing the scavenger hunt back,” Bear said. “We didn’t last year. This year we are giving away a licensed Wizarding World model of Hogwart’s Express for it.”

Also making their returns are three men who have appeared in the Harry Potter films.

James Payton, who played Neville Longbottom’s father, Frank, in Harry Potter and the Order of the Phoenix and Walles Hamonde, who portrays an Auror in Fantastic Beasts, will once again be signing autographs and doing their Order of the Improv show.

Also returning is Jim Tavaré who played Tom, the innkeeper of The Leaky Cauldron in “Harry Potter and The Prisoner of Azkaban.”

He has had a long career as a comedian, well known for appearing in formal wear and playing an upright bass. He was the first overseas actor to appear on NBC’s “Last Comic Standing,” has worked with Ricky Gervais on “‘The Jim Tavaré Show” and is a favorite comedian of England’s King Charles.

“This time he will be bringing his upright bass and will be doing a comedy set for us,” Bear said.

He said the twist of the media stars is that fans can get autographs and have pictures taken with them for free.

“We are going to have a couple of meet and greets and the price of those are included with the price of admission,” Bear said.

And for those who can’t wait to get a taste of the Harry Potter mania, the Two Beaters Wizard Pub is open 7–11 p.m. Thursday–Saturday.

“We have cocktails, karaoke, trivia, prizes and more,” Bear said.

On the Friday before Wizardfest, fans can check in early at the pub so they don’t have to wait in line on Saturday morning.

And Bear is encouraging fans to explore all the buildings.

“We hide things intentionally,” he said. “We want you to see everything but we want you to explore and find it yourself. So, we don’t tell where everything is, but we do give you a pretty good idea. So, go in and poke around and see what you can discover.”