Celebrating a lifetime of work 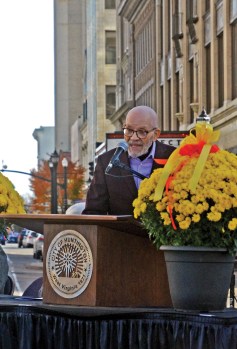 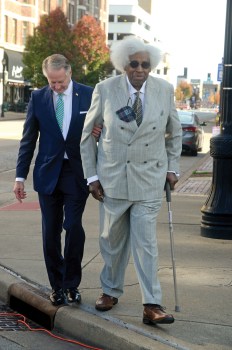 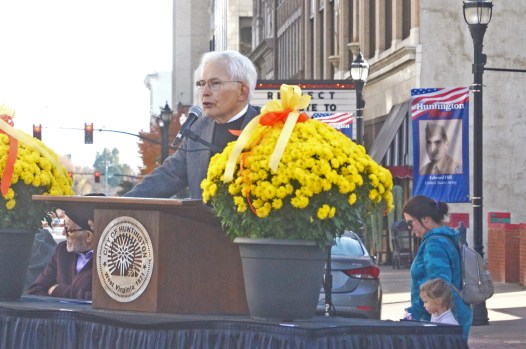 Aubrey King speaks at a ceremony on Friday as the City of Huntington dedicated a portion of Ninth Street as Phil Carter Plaza. (The Ironton Tribune | Heath Harrison) 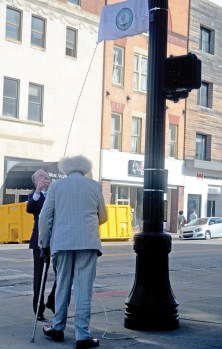 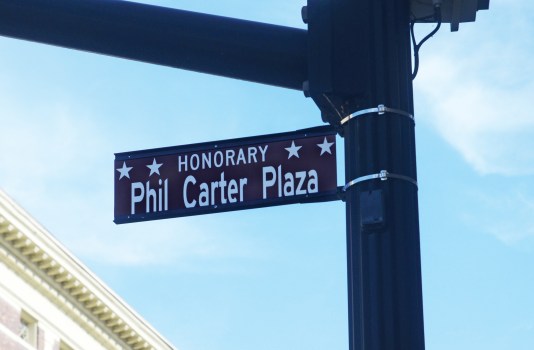 The sign dedicating a portion of Ninth Street in Huntington as Phil Carter Plaza. (Photos: The Ironton Tribune | Heath Harrison) 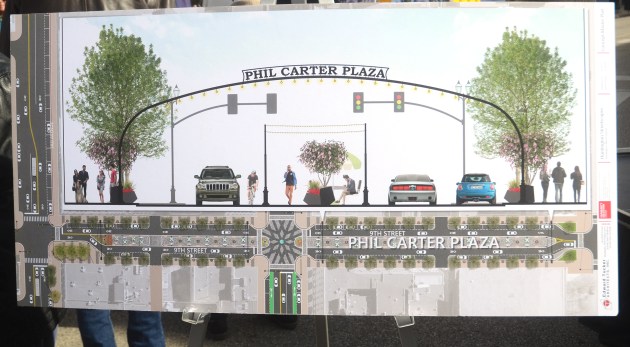 An illustration for the upgrade to Ninth Street in Huntington, dedicated on Friday as Phil carter Plaza. The city will be erecting wrought-iron arches at each entrance to the plaza, as part of renovations to that portion of downtown. (The Ironton Tribune | Heath Harrison) 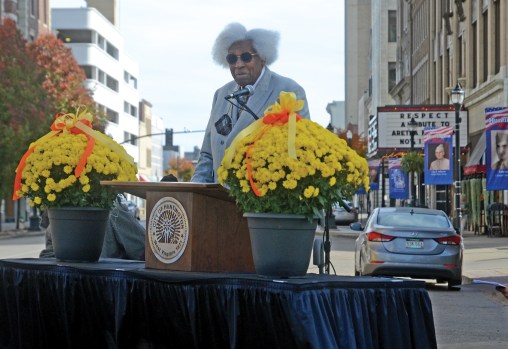 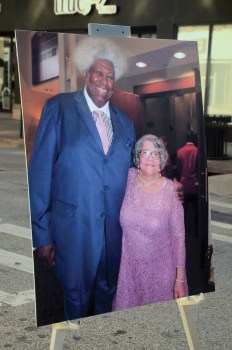 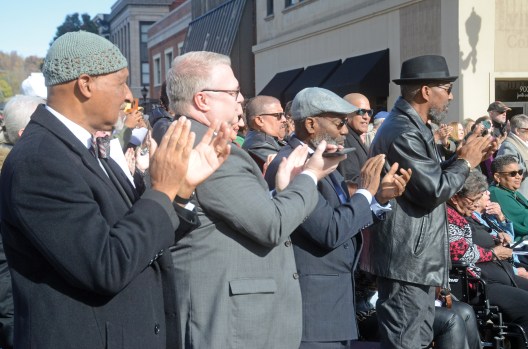 The crowd applauds as Marshall University social work professor Phillip Carter takes the podium at a ceremony on Friday as the City of Huntington dedicated a portion of Ninth Street as Phil Carter Plaza. (The Ironton Tribune | Heath Harrison) 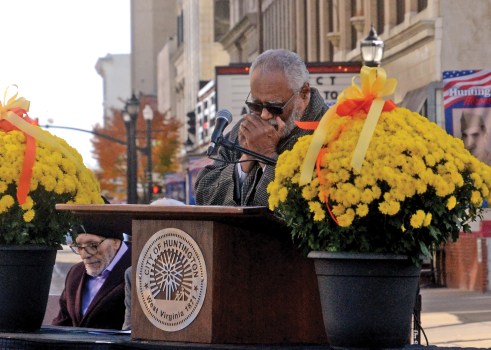 Huntington businessman Michael Thomas plays harmonica before his speech at a ceremony on Friday as the City of Huntington dedicated a portion of Ninth Street as Phil Carter Plaza. (The Ironton Tribune | Heath Harrison) 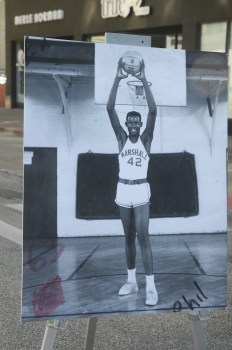 Marshall University social work professor Phillip Carter is seen as a student athlete in this 1959 photo on display at Friday’s ceremony. (The Ironton Tribune | Heath Harrison) 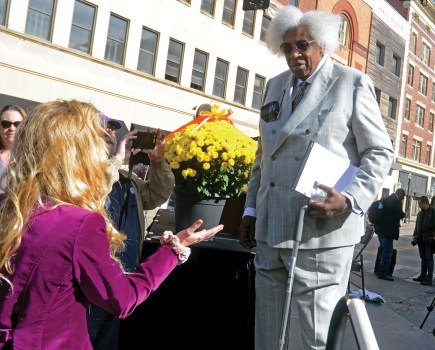 Marshall University social work professor Phillip Carter met with attendees after a ceremony on Friday as the City of Huntington dedicated a portion of Ninth Street as Phil Carter Plaza. (The Ironton Tribune | Heath Harrison) 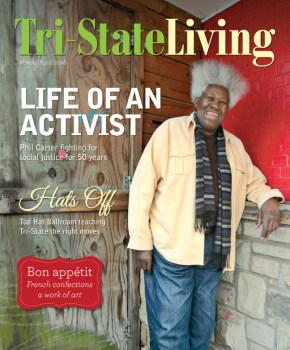 Marshall University social work professor Phil Carter was the featured story and Difference Maker in a 2016 issue of Tri-State Living, published by The Ironton Tribune.

HUNTINGTON, WEST VIRGINIA — The marquee of the Keith Albee Performing Arts Center in the background featured the word “Respect,” and, while it may have been in promotion of an upcoming musical show, it also served as the perfect backdrop and theme on Friday as the City of Huntington paid tribute to one of its foremost civil rights and social justice advocates and, at the same time, tried to come to terms with its segregated past.

The city dedicated Ninth Street, between Fourth and Fifth Avenues, as Phil Carter Plaza, in recognition of the career of the longtime Marshall University social professor and leader of downtown demonstrations for integration in the 1960s.

“We are here to honor you, but we are also here with a very important task before us,” Mayor Steve Williams said to Carter during the ceremony. “By honoring you, we have to remember the past.”

Williams said the only way for the city to move forward “is by owning our past.”

“And owning it means to acknowledge how people of color, particularly black skin, were held back, not acknowledged and set aside within our community,” he said. “We must own that. And Phil helped us begin to understand that over 60 years ago.”

A native of Clay County, West Virginia, who was raised in Clarksburg, Carter has taught social work at Marshall since 1980, including stints as the department’s chair.

He first came to Huntington in 1959 as one of the school’s first Black athletes and one of the first at a Division I institution south of the Mason-Dixon line.

As a student, he formed the group Civic Interest Progressives, which took on segregated conditions in the city’s hotels, theaters and restaurants.

Speaking at the ceremony was Aubrey King, a Marshall University and John Hopkins University graduate who worked in Washington, D.C. for three decades as a lobbyist and taught government and politics at the University of Maryland.

As one of the white students allied with the activists, he said he remembered Carter coming to him and proposing the group had lunch at Bailey’s Cafeteria, a segregated downtown establishment.

King said the staff refused to serve the Black students and that, when this happened, the white students invited them over to their table to share food.

“Then the manager came over and took names,” King recalled. “And I was foolish enough to give him mine.”

King said he was later visited at his dormitory by the sheriff, who presented him with a summons on charges of trespassing and disturbing the peace.

These did not hold up, ultimately, when he went before a judge.

“The judge said all the precedent came from southern states and, as far she was concerned, they had no value and the case was thrown out,” King said.

The activism also came at academic risk to King, and he told of how those who took issue with his work with Carter, tried unsuccessfully, to get his fellowship abroad to India rescinded.

Of Carter, King, who has retired to Huntington, said he “kept track of his accomplishments over the years.”

“I’m so proud to know Phil Carter, to have had experiences with Phil Carter and to call him a brother and friend,” he said. “This a great celebration of a great life.”

Also speaking was Dr. Major Mayo, an Ironton native who established a career as a dentist in Silver Springs, Maryland, and took part in demonstrations at Huntington’s theaters with Carter.

Mayo said he first encountered Carter shortly after coming to Marshall, at a time when the school only had about 50 Black students, who were a close-knit group.

“We all knew each other and hung out together,” Mayo said.

He recalled that, not long after meeting Carter, he was also introduced to Hal Greer and recalls the two facing on the basketball court.

“I figured mild-mannered Phil Carter was going to get run over,” Mayo said, but said this was not the case. “He reminded me of when Bill Bixby would turn into the Incredible Hulk.”

He said Carter approached him about taking part in demonstrations and was “very persuasive.”

He said, at the time, he assumed it would be a one-time event, but “that wasn’t enough for Phil.”

“I thought he must be crazy,” Mayo said. “But he kept on demonstrating until downtown was integrated. When I go to downtown Huntington and I stay in a hotel, I thank Phil Carter for what he has done.”

Carter’s activism in following years includes serving as president of the Huntington NAACP, and one of the speakers was a fellow president of that group, Michael Thomas, a businessman who own the Tudor’s Biscuit World franchise on 20th Street.

Thomas began by playing harmonica for the crowd.

“I never miss an opportunity to break out my blues harp,” he said, before reading “an epic hero poem” he composed, titled “Sir Sire Phil Carter.”

“I’ve watched this man for a very long time, observations both near and far, empowering lives across the line, no matter who they are,” Thomas said. “Impactful, imposing, nearly seven-foot-tall, Afrocentric fist above his head. He’s the one standing with y’all when being faced against the dread.”

After statements were read from Del. Sean Hornbuckle and U.S. Sen. Joe Manchin, Carter took the podium to rapturous applause from the crowd.

“So powerful, so emotional,” he said of the tributes. “Thank you for being here and thank you for sharing.”

Then, he began his prepared remarks.

Carter thanked Williams and the city and Marshall associate librarian Kelli Johnson, who emceed the event, as well as all of the city workers who set up the area and blocked traffic.

“This ceremony is such an honor and I accept the street name on behalf of our family,” he said, naming his wife, Beverly Thomas Carter, an Ironton native, their children and extended family.

Carter expressed his appreciation for those he has worked with, including students, faculty, the community and groups such as Black United Students and Marshall Action for Peaceful Solutions.

Following Carter’s remarks and the unveiling of the street sign, Williams unveiled an artist’s depiction for the plans for the plaza, which included a wrought-iron archway at each end bearing the name “Phil Carter Plaza.” The arches will be part of an overall renovation for downtown, the mayor said.

Williams said the idea of honoring Carter came when he was approached by Bishop Samuel Moore of Full Gospel Assembly in Huntington.

Discussing the day with The Tribune that evening, Carter said he was surprised and moved to see those plans.

“I had no idea,” he said. “I thought it would be just the sign on the corner. It was overwhelming.”

He said the event “brought about a great deal of positive memories.”

“It means an awful lot,” he said. “And it provided me with the opportunity to include other people who have been out there and not recognized — a group of individuals who never met each other. It was far beyond anything I expected.”