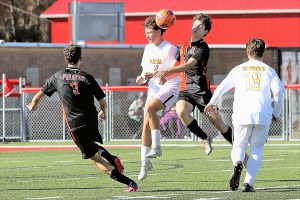 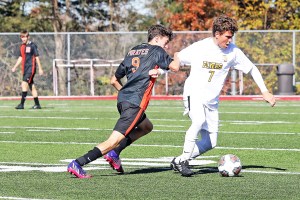 JACKSON — When the season ends deep in the tournament, it’s always a tough situation filled with emotions.
But for coach Mike Balestra, there was some disappointment but more pride in how the St. Joseph Flyers exceeded expectations despite a 7-0 loss to the Wheelersburg Pirates in the Division 3 district championship game.
The Flyers finished the season 14-5-1 as the advanced to the district finals for the third time in the past 4 years.
St. Joseph had 6 shots with 3 on goal, 5 foul, 5 cornerbacks and 2 off-side penalties. Wheelersburg had 27 shots with 20 on goal, 7 fouls, 4 corner kicks and one off-side penalty.
All the Pirates’ scoring was done by 2 players as Max Hagens had 4 goals and Nick Sylvia 3. Goalkeepers Breyden Byrd and Jeremiah Straton combined for 3 saves.
“Wheelersburg is an excellent team with an abundance of talent. They are well-coached and disciplined,” said Balestra.
“This was the best defense we faced all year. They have won the district the past three years. They have an excellent program.”
Balestra then turned his thoughts toward his team and seniors Zachary Johnson, Matthew Heighton and Mark Hodges.
“All three have played for four years and have been our captains and are responsible for leading the team to a successful season,” said Balestra.
“Zachary Johnson is an excellent player, student and leader. He finished his career breaking our boys school record for goals scored with 99 and for goals in a single season (44).
“Matthew Height started the past two seasons at right defensive back and he has worked very hard to improve his skills and his contributions to the team are not underestimated. Matt is the hardest worker on the team. He is an excellent student and leaders.
“Mark Hodges started this year at left defensive back. He is a very hard worker and strives to be the best. He is a multi-sport athlete and also plays golf in the fall. He is an excellent student and leader. All three carry a 4.0 grade point average and are leaders on and off the field as well.
“We will miss them deeply.”