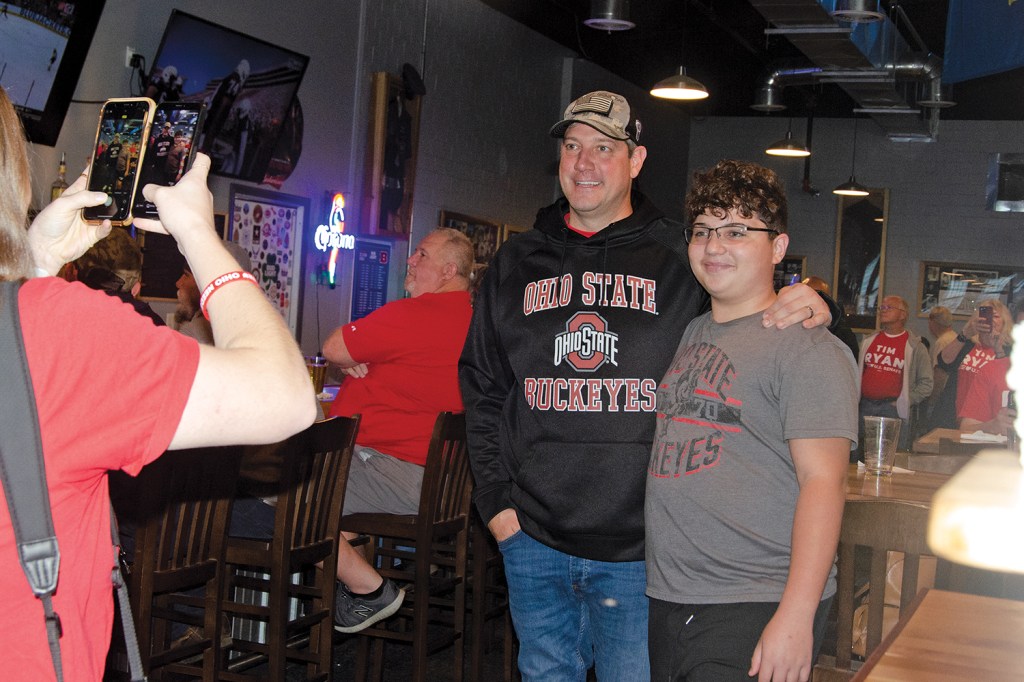 U.S. Rep. Tim Ryan, D-Ohio, poses with a young supporter during a stop at The Armory in Ironton on Saturday. Ryan is facing Republican J.D. Vance in next week’s election for the U.S. Senate seat of retiring Republican Rob Portman. (The Ironton Tribune | Heath Harrison)

Democratic nominee cites record on economy in his district

Ryan, the Democratic nominee, made a stop at The Armory Smokehouse, where he gathered with Mayor Sam Cramblit II and supporters and took in The Ohio State University game on television.

Ryan spoke with The Tribune about the race prior to his Ironton stop.

Recent polls have shown the race tied or within the margin of error and forecasters have rated the state as a toss-up. 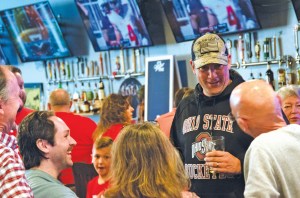 U.S. Rep. Tim Ryan speaks with the crowd during a stop at The Armory in Ironton on Saturday, where he joined them in watching The Ohio State University game. (The Ironton Tribune | Heath Harrison)

“We’re feeling a lot of momentum,” Ryan said of the campaign. “I think the polling is really missing the energy on the ground. We can feel it at our stops at our events. We’ve got a lot of Republicans helping us, including Rob Portman’s former chief of staff, who is heading up our Republicans for Ryan initiative. And we have a lot of two-time Trump voters who are voting for us, supporting us, working for us.”

Ryan said he has a record of bipartisanship and working to revive manufacturing and that this is needed in the next senator.

“You’ve got to do what we’re doing to bring manufacturing back in my congressional district now,” he said “Our old General Motors Lordstown plant has five different vehicles. Foxconn bought it and they have five different electric vehicles that they’re producing there — two or three cars, a truck and a tractor. And across the street is a battery plant.”

Ryan pointed to Honda announcing a battery plant in southern Ohio as the kind of development needed.

On reducing the polarization and division in the country, Ryan said he has “been ranked in the last two congresses in the top 10 percent of the most bipartisan members of Congress.”

“I’ve got a longstanding reputation of working well with Republicans to get stuff done,” he said. “I don’t want to hate anybody. I don’t want to punish anybody. I’m here to work on behalf of the people and bring people together.”

He said he sought to bring this attitude to his campaign, which has visited all of the state’s 88 counties.

“We’re working really hard to meet people where they are,” he said. “Even if you’re in a red county or you have Republican elected officials, that doesn’t matter to me. We’re working hard to make the difference in people’s lives and, by showing up, you signal that you want to have a conversation. You don’t have to agree with everything.” 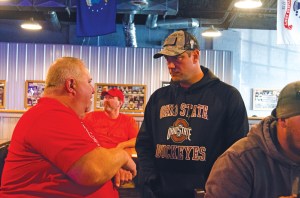 U.S. Rep. Tim Ryan speaks with a supporter during a stop at The Armory Smokehouse in Ironton on Saturday. (The Ironton Tribune | Heath Harrison)

Ryan said he wanted to tell the voters of southern Ohio “I am from a forgotten community.”

“I know what it’s like,” he said. “I will not forget the smallest communities in Ohio. I want to make them comeback communities. I’ve got a record of working across the aisle and working with the Chamber of Commerce. I told your mayor, ‘This is what I want to do with you guys. How can I help in the Senate to bring money home?’ I want to work with the local community to make stuff happen. To me, that’s the ultimate job of a senator.”

On his opponent, Ryan said he felt “really good that Ohio is going to reject the extremeness of J.D. Vance and the weird stuff that he always wants to talk about.”

“I would say you really can’t trust J.D. Vance on the issues that are most important,” Ryan said. “He says he wants to be tough on China, but he’s actually invested into American companies that manufacture things in China and ship them back. That’s the exact thing that hurt my area where I come from in Youngstown and hurt Ironton, Portsmouth and Marietta. He’s on the wrong side of that issue and he’s getting completely funded by Mitch McConnell and the Silicon Valley billionaire Peter Thiel. He’s already bought and paid for before he even gets in there, so he’s not going the guy to able take on the powerful interests in Washington, D.C.”

Ironton has been an issue in the campaign, with Ryan’s campaign running ads following an Associated Press story that Vance’s now-shuttered nonprofit, “Our Ohio Renewal,” had sent a specialist, Sally Satel, with ties to the pharmaceutical industry to the area for a yearlong residency. Satel previously had questioned the role prescription painkillers played in the addiction epidemic, the Associated Press reported.

“Not only did he bring her in and try to blame the people who got addicted, and stick up for big pharma — that tells you all you need to know about J.D. Vance,” Ryan said. “But to think that was just a one off — as recently as a couple Saturdays ago, he was going to do a fundraiser with the doctor who was one of the top 10 pill pushers in the entire country. The only reason he didn’t is because the media caught wind of it, blew it up and he canceled it. He did this years ago and tried to do it again on Saturday. This guy is not for the average person.”

Central to his views on fighting the epidemic, Ryan said, “We’ve got to identify fentanyl as a weapon of mass destruction.”

“And we need to make sure local communities have the resources they need,” he said. “We need a stronger border patrol to keep this junk out of country and we need to punish China and Mexico for being complicit.”

Ryan said the key to bringing development to Appalachia begins with “continuing to build out an industrial policy.”

“I think part of it is making sure this infrastructure money gets to the small and mid-size communities,” he said. “It’s making sure that guys like me use our bully pulpit and any policy initiatives to steer growth into communities like Ironton. And we need to start getting our kids skilled up and job ready when they get out of high school. The idea that everybody had to go to college was a really bad one, so we’ve got to bring shop class back and invest robustly in joint vocational training. To me, that’s kind of the plan on how you plug these communities back in, but you need a senator who knows how to do that.”

Ryan concluded by saying, “I just want people to know where I’m from.”

“I think if people know I’m from the Youngstown area, they’re going to know everything they need to know about me,” he said. “And that I want us to leave the age of stupidity behind us and start coming together as Americans first, not as Democrats and Republicans. I would be honored to have their vote and they would have no greater fighter than me in the Senate.“

— The Ironton Tribune has welcomed interviews with statewide candidates this election season. To see past interviews, visit our website.