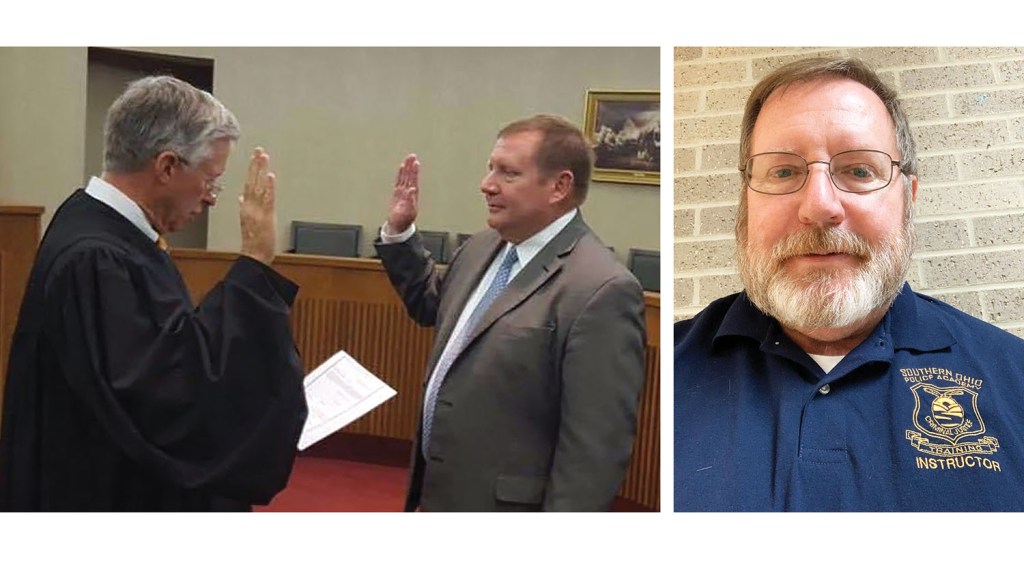 Scott Evans says he was always interested in the military as a potential career, recalling the impact it made on him seeing the area honor veterans every year at the Ironton-Lawrence County Memorial Day Parade.

Evans, a retired Ohio National Guard lieutenant colonel, said he first attended the parade as a five-year-old in 1969, when honorees at the event included not just those of World War I and World War II, but some of the last survivors of the Spanish-American War.

“Coming from such a patriotic area, widespread respect was always given to veterans,” he said.  “It was my first awareness of what Memorial Day was about.”

Evans recalls asking his mother “what is a veteran,” and the reply stuck with him: “someone to be thankful for.”

It is because of them that “we enjoy the freedoms and lifestyle we have today,” Evans said.

Evans said this is especially important for Lawrence County and the Tri-State, as “this area matches any part of the country and exceeds it” in service.

“Any time there has been an armed conflict, it has responded in great numbers,” he said. “Not one time has it failed.”

Evans retired from the military in 2010 after 27 years of service and is a disabled veteran.

He served in Iraq from 2004-2005, commanding the 216 Engineering Battalion in Tikrit, which was the hometown of the country’s former dictator Saddam Hussein.

The 216th supported the entire First Infantry Division over an area roughly the size of the state of West Virginia, he said.

He arrived in Iraq about eight months after the war started.

“We were initially slated for the invasion,” he said, but stated the battalion was kept in Panama, where they had been engaged in a humanitarian mission.

“We shifted 180 degrees,” he said of the deployment to Iraq. “We went from a humanitarian effort to part of the infantry.”

Evans currently works at the Lawrence County Veterans Service Commission, which oversees the county’s veterans service office, and he says their mission is “to provide emergency assistance to veterans and their widows.”

Evans said the commission works to coordinate with local government and groups to provide that assistance, which he said can “literally make a difference for veterans and their families whether they eat or have running water.”

“This country owes an enormous debt to veterans to see that their basic needs are met,” he said.

Evans urged the public to get involved in veterans causes.

One way, he said, is to volunteer with the Ironton-Lawrence County Memorial Day Parade, seeing that its tradition as the nation’s longest-running event of its kind continues.

Evans has served on the parade committee and was its honorary grand marshal in 1998. He also rode in the parade in 2005 as part of a group of veterans returning from Iraq.

“There are a number of volunteer opportunities,” he said of the event, noting that months of planning and organizing go into the event and its clean up, as well as things such as placing flags on the graves of veterans at Woodland Cemetery for the holiday.

Evans helps to manage the veterans section at the cemetery, and also is involved in the Flags of Honor display at the Lawrence County Courthouse each year.

He also recommended people donate or volunteer for Wreaths Across America, which places a fresh pine wreath on each grave at Woodland every December.

Evans said that for veterans, there is a great need, with “people who have absolutely nothing to eat and seeking a steady means of support.”

He said those interested in donating can call the county veterans service office, which works to meet those needs.

He also suggested donations to local food pantries or contacting the veterans office.

“Any time you have extra clothing, spare food, things of that nature, it makes a great difference,” he said.

He said the Veterans Service Office can be found on their Facebook page or by calling 740-533-4327. He also recommended the Ohio Department of Veterans Services, which oversees offices across the state.

He said he was one of the last of a generation to grow up when the draft was universal and military service was more common.

“Every young man did it,” he said, citing the experience of those in World War II. “It was a truly common experience. I realize young people today don’t have that same expectation.”

Though he said the all-volunteer military of the U.S. today is the best-trained and equipped in the world.

“It is a very viable and honorable career choice,” he said. “It is a great option for someone who hasn’t decided what to do with rest of their life.”