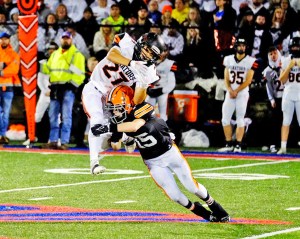 PORTSMOUTH — Coach Trevon Pendleton may be the head football coach of the Ironton Fighting Tigers, but he might be able to do a little work moonlighting on the side as a weatherman.

Rain fell for most of the day but was gone by the time the Division 5 regional semifinal game began Friday at the Trojans Colosseum. That didn’t stop another type of stormy weather that came and went as Ironton took a big lead, saw Portsmouth West try to creep back into the game, and then storm away down at the end and rout the Senators 35-7 to reach the Region 19 title game.

“These guys just keep fighting and battling. We tell them at times you have to weather the storm and sometimes you’ve got to be the storm,” said Ironton coach Trevon Pendleton.

“Early on we was being the storm and early there in the second half we had to weather the storm a little bit and then do something to flip the momentum again. We was able to do that. Hats off to these guys, the coaches for their weekly preparation and the players for getting after it every day.”

Ironton (13-0) scored 21 points in the second quarter to lead at halftime only to have West get its lone score in the third quarter and make it 21-7.

But the Fighting Tigers got 2 more touchdowns early in the fourth quarter to win going away.

Creating the storm that must have felt like a small hurricane to the West defense were quarterback Tayden Carpenter and wide receiver Ty Perkins along with storm cloud AidenYoung.

Carpenter was 16-of-21 for 264 yards and 4 touchdowns and an interception. He also bought some time by scrambling and finding the open man.

Perkins had 6 receptions for 147 yards and 3 TDs, one being just a pass in the flats that he turned into a 37-yard scoring play. Young got behind the secondary on a Carpenter scramble and outran the secondary for a 64-yard scoring catch.

“We work scramble drill and when it’s that clear that it’s paying off it’s really nice to see,” said Pendleton. “Obviously, we had some guys that was able to break free and make plays and ultimately it was the difference in the game,” said Pendleton.

Neither team scored in the first quarter but Ironton got a fourth down stop at its own 28-yard line and began an 11-play scoring drive.

The biggest play in the drive was a 13-yard pass to C.J. Martin and on the first play of the second quarter Amari Felder ran one-yard for the touchdown. Evan Williams kick the first of three conversions and it was 7-0.

Ironton forced a three-and-out and had the ball at midfield, but a holding penalty and an unsportsmanlike penalty moved the ball back to the 35.

Taking a page out of last week’s rapid scoring, quarterback Tayden Carpenter hit Aiden Young on a 64-yard catch and run touchdown play and Williams’ kick put the lead at 14-0 with 9:55 on the clock.

West returned the kickoff to midfield but another unsportsmanlike penalty on Ironton gave West the ball at the 35.

The Senators got to the 17-yard-line thanks to a pass interference but Perkins tipped a pass near the end zone and Landen Wilson intercepted the deflection and Ironton had the ball at the 2-yard line.

Ironton ended up punting the ball away but a sack of West quarterback Mitchell Irwin by Jesse Copas on a fourth down play at their own 46 gave the Fighting Tigers a first down at the West 47.

Three plays later, Carpenter and Perkins clicked on a 37-yard scoring pass and a 21-0 lead with 1:05 left in the half.

Ironton got the ball to start the second half but a 15-yard penalty passed the ball back to its own 45 when a scrambling Carpenter was intercepted by Ryan Sissel at the 47 and returned to the 9-yard line.

Two plays later, Sissel scored from 7 yards out and Carson Malnar’s conversion kick cut the deficit to 21-7with 7:45 on the clock.

Ironton punted and Braden Schreck boomed a 47-yard kick to the 6-yard line.

West moved out to the 28 but a sack by Jaquez Keye forced a punt.

The Fighting Tigers set up in good field position at the West 45 where Carpenter threw the easy out pass to Perkins who took it the distance for a 28-7 lead.

A quick three-and-out gave the ball back to Ironton at its own 48. An 11-yard run by Felder put the ball at the 37 and then Carpenter hit Perkins in stride behind the safety for a 37-yard TD pass play and a 35-7 lead with 9:30 to play.

Ironton will now play Harvest Prep next Friday for the regional title at a site to be determined, probably Chillicothe.