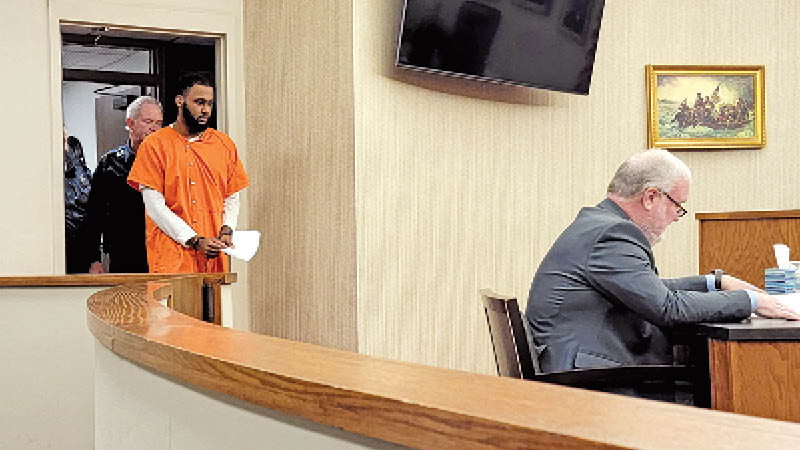 A man accused of murdering his grandfather pleaded not guilty to the charges on Wednesday morning.

Kace Deleon Pleasant had been indicted during a special grand jury hearing in the Oct. 26 death of his grandfather, 73-year-old Harold “Tim” Pleasant, at their shared residence at 1217 S. Ninth St., Ironton.

During the arraignment hearing, Lawrence County Common Pleas Court of Judge Christen Finley read off all the charges.

During questions to confirm his identity, Finley asked Kace Pleasant for his current address and he replied “the house that I was at before I came here.”

“If you are released, that is the address you would return to?” she asked.

Kace Pleasant paused and then consulted with his appointed attorney Roger Smith since the last address was his grandfather’s house.

“He told me he has no place to be released to,” Smith said.

Finley then asked how Kace Pleasant was pleading to the indictment.

“Not guilty, your honor,” Smith said.

The judge accepted the plea and then moved onto hearing arguments about the $1 million cash or surety bond that Kace Pleasant was being held in jail on.

Anderson replied that Kace Pleasant did not appear to have any felony criminal history but had one, possibly two, misdemeanor charges.

Smith asked for a reduction in the bond amount.

“I understand the seriousness of the charges, but he can’t do a $1 million bond,” he said. “I’m not even sure what kind of cash or surety bond he could make.”

Anderson opposed a reduction, saying that when Kace Pleasant fled from police on Oct. 26 “and speeding in excess of 140 mph after leaving the scene of this crime. We also have evidence that the defendant was actually Snapchatting while driving at excessive speeds, making statements that this was going to be his last free night.”

Anderson said they have a real fear that Kace Pleasant would not show up for court if he is released.

“He has nowhere to be, we see no reason that the bond should be less than $1 million,” he said.

Anderson said that he would expect a trial to start in January, unless the defense waives the time constraint that a defendant’s case has to go to trial within 90 days of the charges being filed.

The hearing then ended.

The case began on Oct. 26 after garbage men were doing their rounds and a man, alleged to be Kace Pleasant, tried to dispose of bags of what looked like bloody clothing. An officer from the Ironton Police Department arrived at the scene and called detectives after confirming that the bags did contain blooding clothing and that the bags and the person trying to discard the items had both come from a red house located at 1217 S. Ninth St.

As officers were trying to do a well-being check on any residents of the house and get a search warrant for the residence, they said a man, later identified as Kace Pleasant, came out of the house, got into a vehicle and left the scene. He was arrested on a charge of fleeing and eluding by the Scioto County Sheriff’s Office in Lucasville.

Once the IPD officers got a search warrant of the house and grounds, and they said what appeared to be a dead body wrapped in a rug was found under the back deck of the house.

It was later confirmed to be the body of Harold “Tim” Pleasant.

Anderson has previously confirmed that Harold “Tim” Pleasant was killed by three gunshots to the head.