Thomas honored as vet of the year 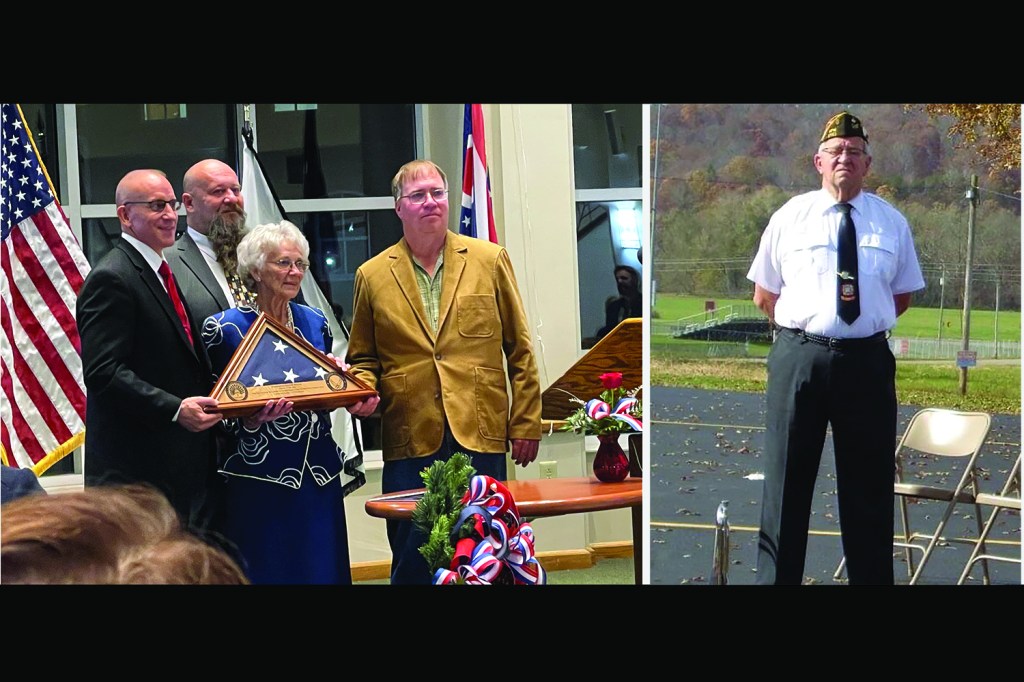 LEFT: Lt. Col. John Turner (retired) presents Barb Williams and sons with a flag for her husband, Thomas Williams (RIGHT PHOTO), who was inducted as the Lawrence County veteran of the year on Wednesday. Thomas died last year and was honored posthumously. (Submitted photo | Marty Conley)

The fourth Lawrence County Veteran of the Year ceremony took place at Ohio University Southern on Wednesday and this year’s induction was one of remembrance for a man who devoted his life to giving to his community.

Tom Elbert Williams was named as the 2022 Veteran of the Year.

Williams, who died last year at age 75, was honored posthumously and his wife, Barbara, and sons, Craig and Scott, were on hand to accept.

Williams started working on his teaching degree at Ohio University Southern in 1964 and joined the U.S. Air Force in 1965. He served a one-year tour of duty in Vietnam, from 1967-1968, then was stationed in South Dakota before returning to Lawrence County.

Upon his return, his contributions to the community were numerous.

While finishing his teaching degree, he worked at Open Door School, conducting manual training at night.

After completing his bachelor’s degree in 1972, he spent the next three years teaching, and coached at Windsor Junior High School and at Symmes Valley High School.

Williams also volunteered with the Aid Fire Department as a first responder with Emergency Medical Services for 16 years, a position he kept until his health deteriorated from Agent Orange exposure.

Despite this setback, he still felt the need to give and began focusing on ways to help his fellow veterans through
veterans programming, attending military funerals, programming honoring the flag, putting flags on graves at local cemeteries, conducting home visits to veterans and attending veterans events at schools.

In 2008, he became a member of the Lawrence County Veterans Service Office and Commission, serving until 2021.

Friends and family said Williams never stopped being of service to others, and was known for giving away vegetables from his garden, helping with snow removal, changing tires, cutting down trees and anything to make others’ lives easier.

The Lawrence County Veteran of the Year award was created in 2018, with nominations coming from the community. Past recipients are Matthew Jenkins (2019), Martin Jackson (2020) and Dean Palmer (2021).