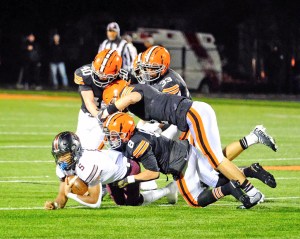 WAVERLY — The Tayden Carpenter to Ty Perkins Show appeared to be the headliner.

But the dynamic duo had to share the spotlight with the defense as the Ironton Fighting Tigers shut out the Harvest Prep Warriors 34-0 on Friday to win the Division 5 Region 19 championship.

“I’m pretty please with our performance, just our effort and our toughness, We preach mental toughness and our mantra this year comes from a quote ‘mental toughness is physical toughness’ and I think we showed that tonight,” said Ironton coach Trevon Pendleton.

“I think our kids showed up tonight. We had some kids dinged up, some kids not able to play, some kids fighting some illness, and you know man, they just kept fighting. They prepared, they did all the little things tonight and it showed up tonight in the way they played.”

Ironton will now play Germantown Valley View at Cincinnati Princeton High School at 7 p.m. next Friday in the state semifinals. This marks Ironton’s third trip to the Final Four in the past four years.

The two teams last met in the 1999 state semifinals at Princeton  High School with Ironton winning 37-29.

Carpenter was 15-of-20 passing for 243 yards and 3 touchdowns while Perkins caught 6 passes for 123 yards and all 3 scores for the bulk of Ironton’s 322 total yards.

But the defense took on the Warriors who were averaging 41 points a game while giving up 11. Ironton held Harvest Prep to 130 total yards including just 49 yards rushing on 22 carries.

In fact, the Warriors had minus 5 yards total offense in the second half as they ran just 9 plays. Quarterback Aidan Rogers was 0-of-6 passing in the second half with 2 interceptions, one by Landen Wilson and one by Perkins who had 2 picks on the night.

“(Perkins) is just a very talented kid. He’s worked to put himself in that position. I can’t say enough about him,” Pendleton said of the district Offensive Player of the Year.

Ironton forced a 3-and-out to start the game and proceeded to go 70 yards in 11 plays with Carpenter hitting Perkins on a 23-yard touchdown pass. Evan Williams kicked the first of 4 conversions.

The Warriors (13-1) answered with a drive to the Ironton 12-yard line, but a high snap was mishandled and Barnes jumped on the ball to halt the only scoring threat.

“He’s a very smart football player. He’s a 3-year starter, he’s led us in tackles multiple times, he a competitor and one of the toughest kids I’ve ever been around,” Pendleton said of the district Defensive Player of the Year.

The Fighting Tigers got the ball back near the midway mark of the second quarter at their own 33 and scored in just 5 plays.

An 11-yard pass to Shaun Terry to the drive started and a 37-yard diving catch by Perkins put the ball at the 2-yard line when Carpenter scored for a 14-0 lead with 6:00 on the clock.

Ironton asserted itself offensively to begin the second half with a 12-play, 82-yard drive that culminated on a 20-yard TD pass from Carpenter to Perkins and it was 21-0 with 6:32 left in the quarter.

On the Warriors’ first play, Perkins came up with an interception at midfield to set up a 8-play scoring drive that ended — you guessed it — with a Carpenter to Perkins pass covering 20 yards and it was 28-0.

“That was big. That was very big,” Pendleton said of the drive.

“Tayden Carpenter set the tone for that especially with his legs by extending plays. We haven’t done it a lot this year. He’s more than capable. He hasn’t done that a lot. We’ve kind of saved that for when we need it.”

The Warriors elected to try and convert on fourth down at their own 31 only for Trevor Carter to sack Rogers for an 11-yard loss and Ironton was at the 20-yard line.

Jaquez Keyes ran 2 yards on the first play of the fourth quarter to make it 34-0 and start the running clock.