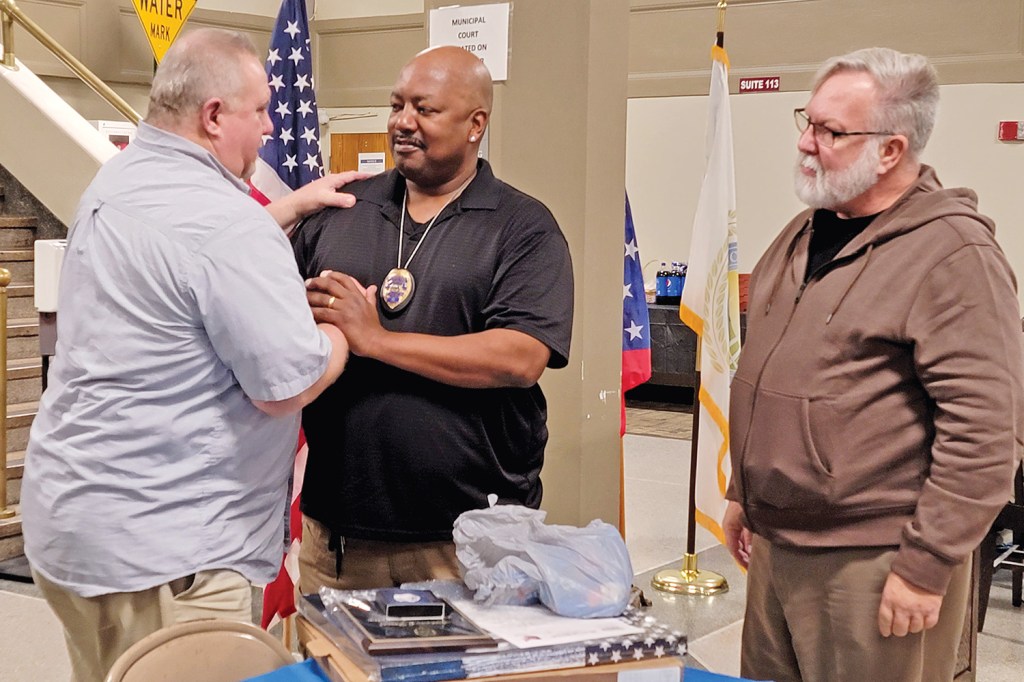 After 26 years with the force, Sgt. Tony Forest has retired from the Ironton Police Department.

On Wednesday afternoon, there was a retirement party for Forest in the lobby of the Ironton City Center with family members and his fellow officers in attendance.

But he assured everyone that he will still be in law enforcement.

“In another week, I go right back to work,” he said. “I will be working with 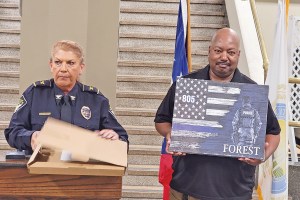 Marshall University Police Department. I will still be around, I will still be in the city. I have enjoyed working here and you guys stay safe. I am going to miss you guys.”

Forest will also still continue to serve as a U.S. Marshal.

As part of his retirement ceremony, IPD Chief Pam Wagner, who came into the IPD in the same year as Forest, read a list of Forest’s accomplishments.

Forest graduated from Ironton High School in 1989 and started his law enforcement training in 1994 and graduated in 1995. His first job was with the Summit County Sheriff’s Office and got training as a narcotics investigator.

He joined the IPD in 1996, “where all his dreams were fulfilled because he has worked with me ever since,” joked Wagner.

In 2004, he became a defensive tactics instructor and developed techniques that are used by law agencies across Ohio.

“I taught with Tony for a lot of years and there is a lot of those techniques we still teach and use today,” Wagner said.

He has taught at the Lawrence County Police Academy, the Scioto Police Academy and even at the main Ohio Peace Officer Training Academy in London.

Forest got a commendation in 2000 for bravery and valor for responding to a robbery at Lincoln Savings and Loan. The suspect said he had a bomb but it turned out the bomb was not operative.

In 2003, he got a commendation for exemplary service when he and Capt. Dan Johnson responded to a medical emergency at a convenience store. The pair started CPR until medical services arrived.

“The department was told by medical professionals that without their quick response and knowledge, that man would not have survived,” Wagner said.

Forest thanked the assembled friends and family for coming to his retirement party.

“It is tough to leave this department when you’ve been with these guys for 26 years,” he said. “I am proud to have worked with you guys.”

One thing that he is proud of is that he has trained a lot of IPD officers.

“I would say over 90 percent of the department now, they came through my academy,” Forest said. “So that is a good achievement. I like seeing that.”

And Forest has trained more than just his fellow IPD officers.

And when he leaves the Marshall University PD, will he go to another police department?

“I will probably just hang it all up and go fishing,” Forest said.