Lawrence County woman named as Homemaker of the Year 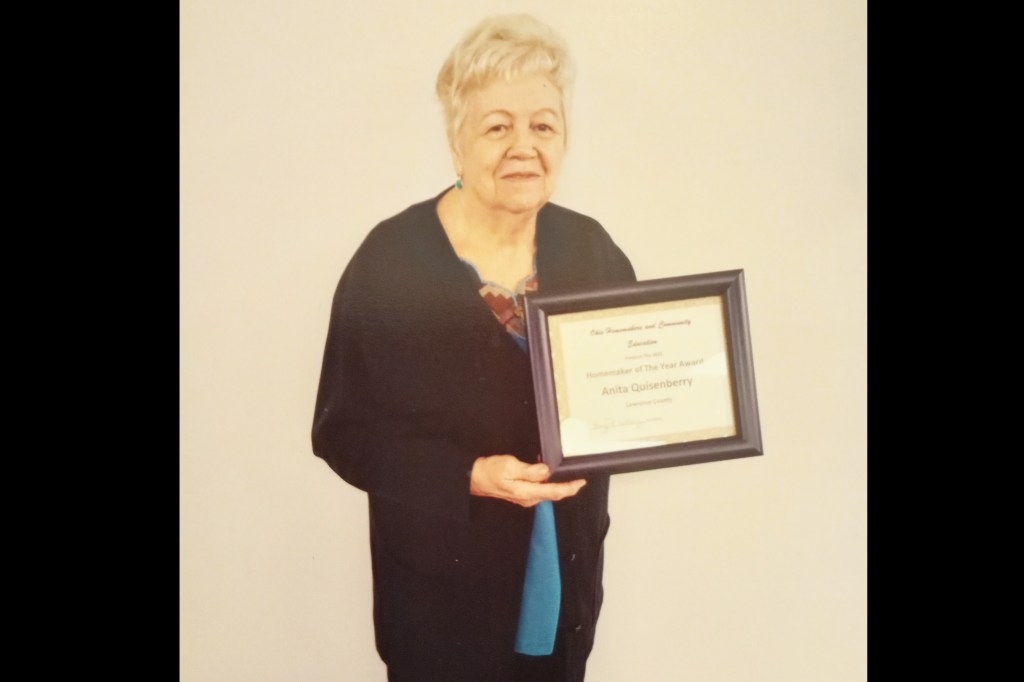 Anita Quisenberry, president of the Ensee Homemakers in Lawrence County, has been named as Homemaker of the year for the region by the Ohio Homemakers. (Submitted photo)

Quisenberry is president of Ensee Homemakers

A member of the Ensee Homemakers in Lawrence County has been named as Homemaker of the Year for the region by the Ohio Homemakers.

Anita Quisenberry has been a member of homemakers for at least 37 years. During this time, she has held numerous local, county, district and state offices.

She has served as Ensee president for many years, as well as secretary several times. She held the county office of president of council and public relations. In the southern district, she has served as director.

As president of Ensee, she encouraged the ladies to make message kits for a nursing home and baskets of goodies for another nursing home.

She helped with making blankets for Lilly’s Place, the first home for after birth addicted babies, which were well received. Prayer shawls for the local hospice house were given to grieving family members, and she participated with the county in making and raffling quilts to help raise money for the backpack program for local schools.

During her term as president of the Ensee Homemakers, membership has almost tripled.

Anita grew up with seven older siblings in rural Ashland, Kentucky. As a child, she was a member of a local 4-H club, where she learned basic skills in sewing, canning and animal care.

As a young adult, she met Richard Quisenberry who later became her husband. During their 65 years of marriage, they became parents of two children who, in turn, blessed them with two grandchildren and two great grandchildren.

Anita’s hobbies include sewing, quilting, cross stitch, card creation and candle making. Members say she is a constant encouragement to all who know her.

“When sick, or grieving, you will always find a beautiful card in your mailbox from our one and only Anita Quisenberry,” they said.