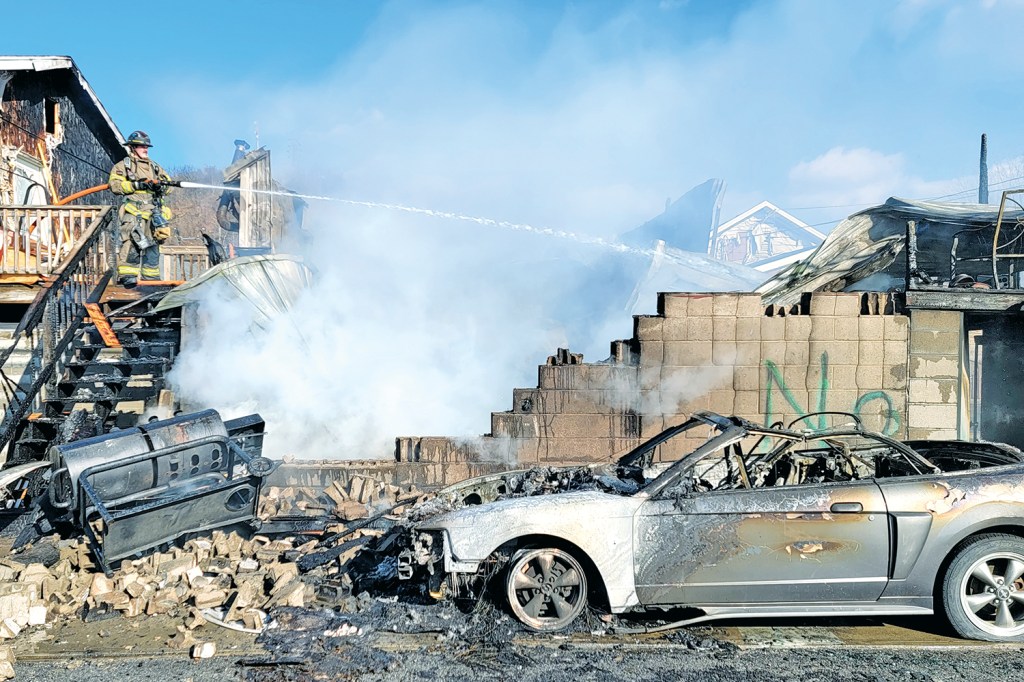 An Ironton Department firefighter puts water on a garage in the 2500 block of 11th Street on Friday afternoon. (The Ironton Tribune | Mark Shaffer)

One firefighter sent to hospital

On Friday afternoon, an Ironton garage fire was contained but melted the siding on neighboring houses and sent one firefighter to the hospital to be checked for possible injuries.

“Just after noon, we got called out to South 11th Street for a garage structure fire,” said Ironton Fire Department Chief Mike Mahlmeister. “Additional firefighters were called out and once they got here, they realized what they had going, they called out everyone.”

Due to low water pressure in the fire hydrant system, the Coal Grove Fire Department was called in.

“We just wanted to make sure we had enough water and we had them bring us some water, just in case,” Mahlmeister said.

He described the garage as more of a mechanic’s garage rather than just a place to park cars.

“It wasn’t your ordinary residential garage,” Mahlmeister said. “They were doing work on cars and that kind of things.”

He said that it was too soon on Friday afternoon to determine the fire’s cause, because they were still putting out smoking debris.

“We were able to contain it to the main garage area,” Mahlmeister said. “The surrounding houses sustained some melting to the siding, but we were able to keep the fire out of those buildings.”

Mahlmeister said one firefighter, Ethan Sheridan, was taken to the hospital because “there was some sort of explosion. I’m not sure if it was a large tire, but the garage also had some propane tanks and some acetylene tanks, oxygen. They had some potential fuels in there that could have gone up.”

Sheridan was sworn in as a IFD firefighter in September 2021.

Mahlmeister said he appeared to be okay.

“He was talking. He was sent for a checkup at the emergency room,” the chief said. “There were no other injuries.