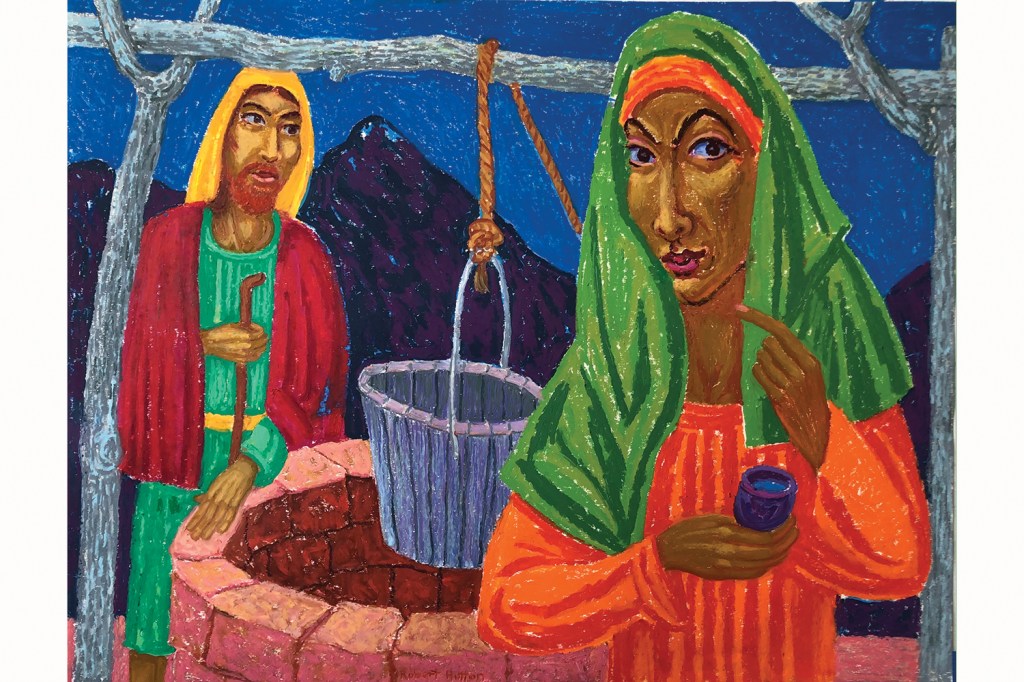 “Could He be the Christ?” Robert Hutton. Oil pastels. (Submitted photo) 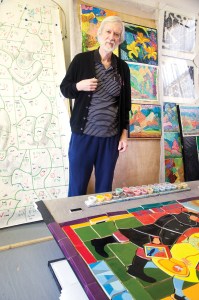 Robert Hutton, of South Point, a retired fine arts professor from Marshall University’s fine arts department, is seen at this studio in this 2019 photo. (The Ironton Tribune | Heath Harrison) 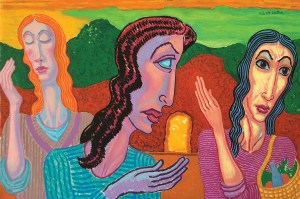 Momentum was strong in its first two years of operation, which coincided with the unveiling of a large ceramic tile mural at the Marshall University lab school, and the gallery was host to multiple events featuring Hutton’s fellow Marshall professors, as well as artists from throughout the region.

However, in March 2020, the COVID-19 pandemic hit and the Huttons were forced to cancel plans for the following months. The closure continued after their property was damaged in the 2021 ice storm and then, most severely, they were both involved in a serious auto accident near their home later that year, in which Robert was injured.

Following a year of Robert’s recovery, the Huttons are set to host their first public event since 2020 with a reception and exhibition set for 1-4 p.m. on Saturday, Dec. 3. 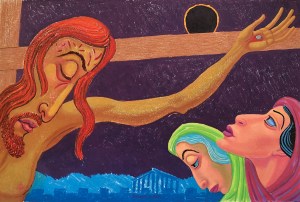 The centerpiece of the exhibit will be a series of oil pastel works that Hutton, who once served as a lay brother for five years with the Society of the Divine Word, a Catholic Missionary order, has based on the New Testament Gospels and the life of Christ.

Hutton began work on the colorful series in 2019 and had worked on it during the pandemic.

While the series was underway, Hutton had said he went about them by imagining himself as a participant in the narratives, whether it was as the deaf man healed by Christ or Peter panicking in a stormy sea.

Included in the display is a subseries of three works depicting Christ at the well with the Samaritan woman.

In one of these, “Could He be the Christ?” the woman seems to turn to the viewer as she ponders the question, while, in another, she and Christ face eye to eye, in a more intimate meeting.

Hutton spoke of picking the Gospel series up again during his recovery.

“An artist never really arrives, he or she simply changes, hopefully grows, and discovers a greater truth,” he said. “After breaking my back in a serious car wreck over a year ago, I was reflecting on a way to continue my work without too much strain.”

He said he had, “surprisingly,” been asked by a few people how the accident would impact his art.

“First, I knew there was something more to realize with the Gospel Series that I had begun with acrylics the year before, during the pandemic, but what was the next step?” he said. “Where do I go from here?  All that I had was a nebulous intimation of a deeper spiritual truth.” 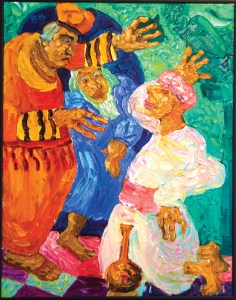 He said, in this situation, as often before, he recalled a saying by A.G. Sertillanges, OP from “The Intellectual Life,” ‘You find your way by taking it.’

“That became my point of departure,” Hutton said. “I decided that a set of oil pastels, a beautiful array of 120 colors at my fingertips, would simplify the process.  Plus, some of the colors were very unusual and seemed to urge upon me the desire to create totally new harmonies (and dissonances).”

He said, with practice, he “found many ways that oil pastels bridged the gap between drawing and painting,” something he said is most evident when the work is seen in person.

In addition to the Gospel series, publicly exhibited for the first time, other spiritual works from Hutton’s career are on display at the gallery, while upstairs is a series of impasto oil paintings that he describes as a sequel to his “Chronicles of Humanity” series of drawings which has been exhibited at the gallery in the past.

Done with knives and blades, the thick, textured painting are impulsive and were created quickly.

“There is a lot of improvisation,” Hutton said. “You just start out painting, and let them grow.” 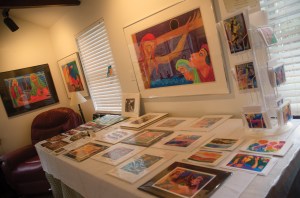 Hutton describes them as “like a diary and a visual journal.” Other than one, which was shown in Columbus, the works, painted in the mid-2000s, have never been exhibited.

The Hutton Wayfarer Gallery is at 52 Private Dr. 250, off County Road 144, about five minutes from the Solida Road roundabout. Following this exhibit, the Huttons are planning additional events, including a return of guest artists. More information can be found by contacting Robin at rhutton@zoominternet.net.

When reflecting on the Gospel series he painted over the past two years, Hutton cites the conclusion of “The Natural Way to Draw,” by artist and teacher Kimon Nicholaides. The text, a major influence on Hutton, was the only book he assigned to students in his drawing courses at Marshall.

“[He] made a statement that I have consistently found compelling, ‘There is always a bigger truth undiscovered – unsaid – uncharted until you meet it,’” Hutton said. “I’m not sure if this creative experience has revealed a ‘bigger truth’, but it was a joyful experience that helped me through a difficult time.”