Williams getting a kick out of her senior year 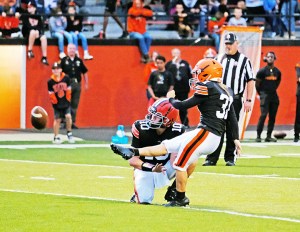 Never in her imagination did Evan Williams think she would get such a kick out of her senior year of high school.

First, she was asked to tryout as the placekicker for the Ironton Fighting Tigers football team.

After diligent practicing, she won the job and became the first female to play in an Ironton football game.

It was a memorable moment for her, but it was barely scratching the surface of what lay ahead.

The diminutive 5-foot-5 Williams whose presence on the field is reminiscent of Notre Dame legend Rudy, went from just trying to make an extra point in her first game to an almost automatic placekicker.

And her success didn’t end with the regular season. She has been kicking conversions all the way through Ironton’s playoff run to the pinnacle that is the Division 5 state championship game in Canton against the South Range Raiders.

While it is exciting to be in the state title game, it has been nothing but great experiences for Williams the entire season.

Williams first attempt at an extra point in a varsity game came in the first week at Wheelersburg against their big rival. It was a moment that has been implanted in her brain.

“Unforgettable. There aren’t many other words better than that to describe it,” said Williams.

“It was truly something I will never forget. Of course, there were nerves but I knew no matter what, I had my team, family and the whole community of Ironton behind me.”

Although Williams’ first attempt was unsuccessful, there were some factors involved that affected the result.

One of the things she had to deal with was big defensive players coming hard in an all-out attempt to block the kick and running right in her direction.

Williams admitted she has never encountered anything close to that activity but she learned to block it out of her mind.

“The first couple of games I paid much more attention to the guys rushing than I do now,” said Williams. “it was all new territory for me and definitely something to adjust to, but I know my guys will protect me so I’m always aware of it but not scared.”

Her first successful conversion came with 7:08 left in the first quarter at Jackson following a 4-yard touchdown run by Jaquez Keyes.

Acceptance can be difficult in some situations, especially for a girl on a boys’ football team with plenty of big and strong boys with plenty of testosterone running through their bodies.

But Williams said her teammates rolled out the welcome mat.

“My teammates really welcomed me with open arms and treated me like one of their own, I could never be more thankful for the coaches and teammates that I have,” said Williams.

Williams has always played volleyball, basketball and ran track. She plays soccer with a club travel team which is why Ironton head football coach Trevon Pendleton asked her about trying to kick extra points this season since he was uncertain whom the team’s kicker would be after last year’s kick Matt Sheridan graduated.

Williams was thrilled with the invitation and what it meant not only to her but other girls.

“I knew this was a decision that not only affected myself but girls’ sports here at Ironton and little girls in Ironton as well,” said Williams.

“Also, Coach Pendleton asked me and I was more than happy to help the football team but this sport has given me much more than I have given it.”

As the point guard for the girls’ basketball team, the all-district performer was on the court Monday against Fairland and Ironton head coach Trevon Pendleton was there to watch his placekicker and practice holding his breath for 90 minutes.

“I’m not going to lie. There were times where she hit the ground pretty hard, but she plays with such effort you worry. But ultimately it’s a great thing to see how competitive she is whether it’s football, basketball, volleyball or whatever she’s doing, she puts her heart and soul into it,” said Pendleton.

“Ironton means the world to her and being a Fighting Tiger means the world to her. So, it’s a great thing to see no matter what happens. One half of you holds your breath and hopes she doesn’t get injured but the other half of you loves to see the competitive nature of her and you know that she’s going to give you everything she’s got every night.”

Williams said playing other sports and playing football involve the same emotions. But she also understands that sports are important to the people of Ironton and that football stands above them all.

“It has been one of the most fun seasons I’ve ever experienced. I get nervous for all sports, but of course never have doing it before and football being a big deal here there were some extra nerves but nothing too bad,” said Williams.

“Football is truly a special sport, especially in Ironton. It brings the community together and being on the field you can feel that. Friday nights in Ironton are unlike any other day or game.”

For Williams, the entire season has been an amazing ride that is taking her and her teammates to their number one goal of playing in the state championship.

And when the season is done, Williams said it will be something she can cherish for the rest of her life.

“I am so glad I chose to do this. Like I’ve said, it has taught me so many things and really opened my eyes. I will forever be in debt to the sport of football for the countless memories it has given me.”

It sounds like Evan Williams certainly knows how to get her kicks.