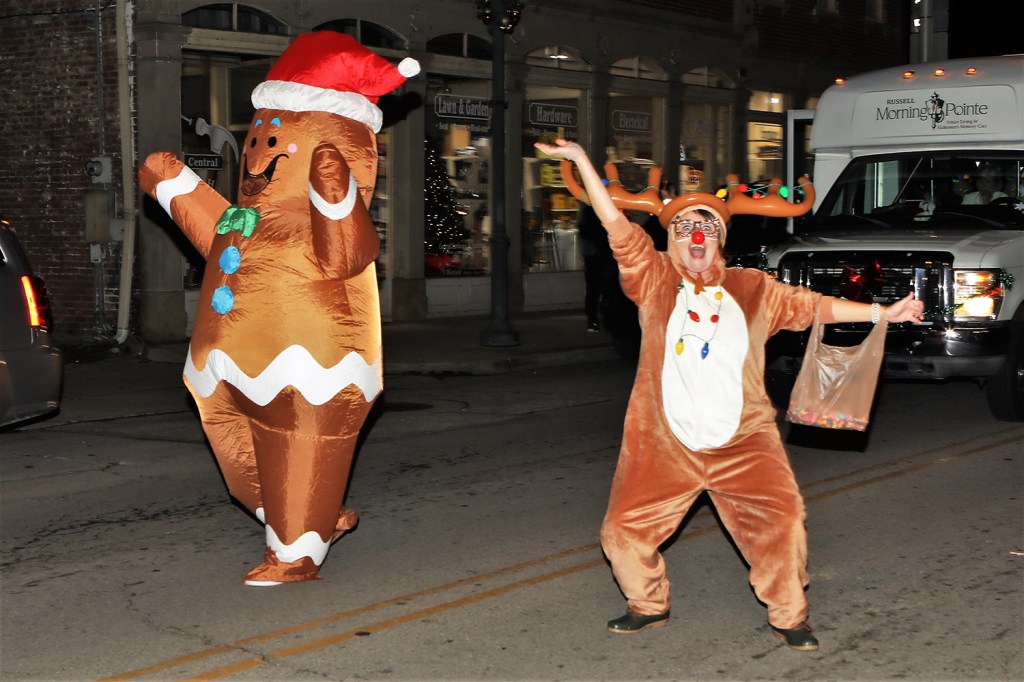 A reindeer shows off her holiday spirit during the annual Ironton Christmas parade. (The Ironton Tribune | Tim Gearhart)

Parade and Christmas at the Courthouse bring families downtown

The city and county got some holiday cheer to start the week with two Christmas events drawing crowds.

The Christmas parade and Christmas at the Courthouse took place in Ironton on Monday.

For nearly two decades, the Ironton Lions Club have been organizing the annual Christmas parade for the city.

This year’s event, which took place on Monday, featured five divisions and more than 50 entrants, Lou Pyles, with the Lions, said.

The route started at Market Street, headed down Second for a few blocks, then returned on Third. Along the way, families lined the streets, with children waving happily to Santa, who appeared at the end of the procession.

In some years, the parade has taken place in snow and frigid temperatures, but Pyles said they were grateful the weather, which was temperate for the last week of November

“Absolutely,” she said. “And there was no rain.”

“We couldn’t be more pleased with how it went,” said Commissioner DeAnna Holliday.

“We had a fantastic crowd here. It started off good and got much larger when the parade ended.”

Boy Scouts were there serving hot chocolate. The Lawrence County Museum and Historical Society had cookies. And the BARKer Farm had Daniel the camel, a pair of goats and a steer.

But most importantly, Santa and Mrs. Claus were there for kids to tell him what they wanted for Christmas. He showed up after his tour of downtown Ironton.

“We gave Santa a landing spot after the parade,” Holliday said. “We had a line of children that went through the courthouse waiting to see Santa. So that was fun. We were happy to see that.”

This was the second year for the courthouse event and all three floors were decorated and lit up with a multitude of lights.

“This is the people’s house and we want everyone to have the opportunity to enjoy it through the holiday season,” Holliday said.

The decorations were put up by the various county departments.

“All of our officeholders come together to decorate their floors,” she said. “It is beautiful. I think it reminds me of a Hallmark movie.”