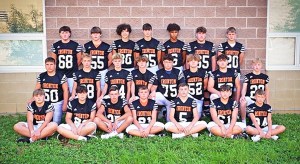 This Ironton Middle School football team is one of the best all around groups I have seen or coached in my career.

But it wasn’t until the 2nd or 3rd week us coaches realized that we could possibly not give up a single touchdown as long as we stayed within ourselves and didnt think about going in and just let it happen kinda deal.

The kids caught on pretty quick about it and made it a goal to shut out every opponent from there on out. Fast forward to week 6 we scored 75 points in a junior high football game. To my recollection in the modern era of tiger football at any level I believe it might be the highest point total in junior high history but maybe at the high school level as well.

The last game against Portsmouth they came inches away from scoring but one of our playmakers Tyson Harvey laid a hit on a wide receiver at the goal line that caused a fumble and from that point forward in the game we had all control.

The most impressive thing from the season is our 8th graders alone only played in about 2, 2 1/2 quarters a game except for the last game of the year.

The team’s 364-0 points scored vs. opponents score will go down in history as one of the most completed years of 8th grade football in program history.

As a coach I’m super proud of them and the effort they gave day in and day out. From learning a bit of a complicated play book and doing some different things, they responded well to adverse situations and came to work every day with a positive attitude. You don’t have too many groups this special in any program that often. Hats off to the kids for their effort and attitude they brought everyday and was a very coachable group of kids. The 2022 football season will be one I never forget as a coach.