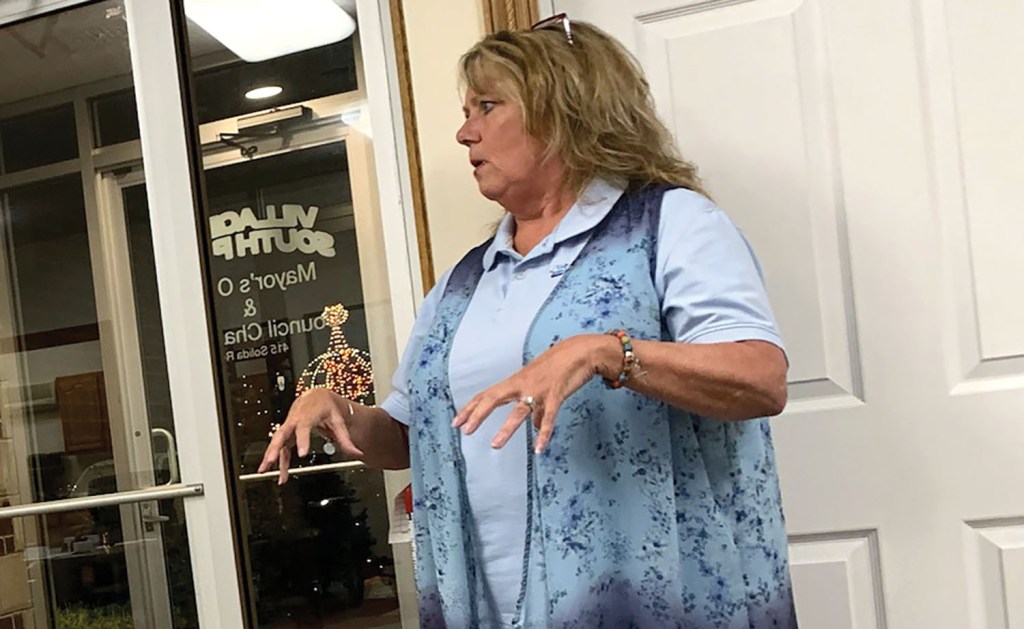 Residents concerned about opening of facility

SOUTH POINT — As is the case in many municipalities across the region, the growth in the number of addiction recovery businesses opening was a focus of discussion at the meeting of South Point’s village council on Tuesday.

The topic came up during the public comment portion of the meeting, when a village resident brought up the opening of a behavioral and substance abuse counseling facility by Bethesda Services in the former U.S. Bank building on Fourth Street. 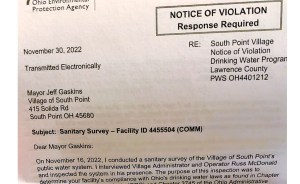 The letter received from the Ohio Environmental Protection Agency.

Council members had heard from residents of the neighborhood who were concerned about the facility.

For the topic, Mayor Jeff Gaskin deferred to council member David Classing, who lives in the neighborhood, to lead the discussion.

Classing said, contrary to talk on social media of “a secret conspiracy” by council to bring the facility to the village, they were not aware of plans for it.

“We did not know it was coming,” he said, detailing the timeline of the building going on sale and stating he did not keep information from neighbors. “We’ve gone to school together. Why would I ruin that relationship?”

Classing said he found out the news from a neighbor when he saw activity at the location.

“The majority of the neighborhood is up in arms,” he said. “They don’t want this in their backyard.”

Classing said he also wanted to “clear up misinformation concerning the facility,” which he had learned would not have overnight residents and does not prescribe drugs.

Classing noted there “is a human element to this,” pointing to the addiction epidemic which has affected the region.

“All of us know someone who has been addicted,” he said. “But I’m with the majority of people. These are out of control.”

The neighborhood around the facility is zoned for both residential and commercial use and Gaskin said the village is unable to deny the facility.

He said there is “very little in our arsenal” and that action such as requiring business licenses would not prevent the opening of facilities.

Smith said the location would be open Monday through Friday and offer mental health and substance abuse counseling.

“There are no violent offenders in any program,” she said. “We want to offer help to sick people. Addiction is a disease, the same as diabetes is a disease.

She said group therapy and counseling would take place at the facility and that clients would be supervised at all times.

Smith said they use a faith-based approach, which includes church attendance and Bible study and that they try to help clients re-enter society, noting that many of them have enrolled in vocational schools.

“We are determined to get people healed,” she said.

“We are at 14th now,” she said. “That’s progress. South Point is not exempt from the drug problem.”

Smith said recovery facilities must receive initial certification from the state to open and that Bethesda is also working further toward accreditation from the Commission on Accreditation of Rehabilitation Facilities, which they hope to attain by August 2023.

“We are very proud of what we are doing,” she said. “We want to be good neighbors to you.”

Following Bowling and Smith’s presentation, council member Brad Adkins interjected that he wanted “to get something legislative introduced to get this out of our community.”

“We are not going to do this,” he said of the facilities.

Gaskin assigned Adkins and Classing to attend a meeting of Portsmouth’s city council to study the issue and what that city has done to regulate recovery centers.

Multiple council members said they have heard concerns from residents about the issue.

• Heard an update from engineer Kevin Wood on projects in the village.

He said the village is working on an application for funding for a new well, which would cost $200,000.

He said South Point is also working with other municipalities in the county to apply for funding from the $500 million the Ohio General Assembly is investing in the state’s Appalachian counties. Application for those funds open on Dec. 9.

• Heard from a resident who is interested in getting the village to vacate an alley behind her home on Main Street. Gaskin told her to come to village hall and they would show her the process to request that.

• Voted for raises that were included in the village budget for the coming year, which was passed at last month’s meeting.

• Heard from police chief Chris Mahjer, who said the department is working with other agencies on investigating potential Internet crimes against children. Mahjer said there were nine individual cases in the village being looked into.

Mahjer also said the department is looking to replace an officer who recently joined the Ironton Police Department.

• Heard from McDonald, who said the village pumped 17 million gallons of water in November. He said his department has recently sold old equipment, raising about $20,000.