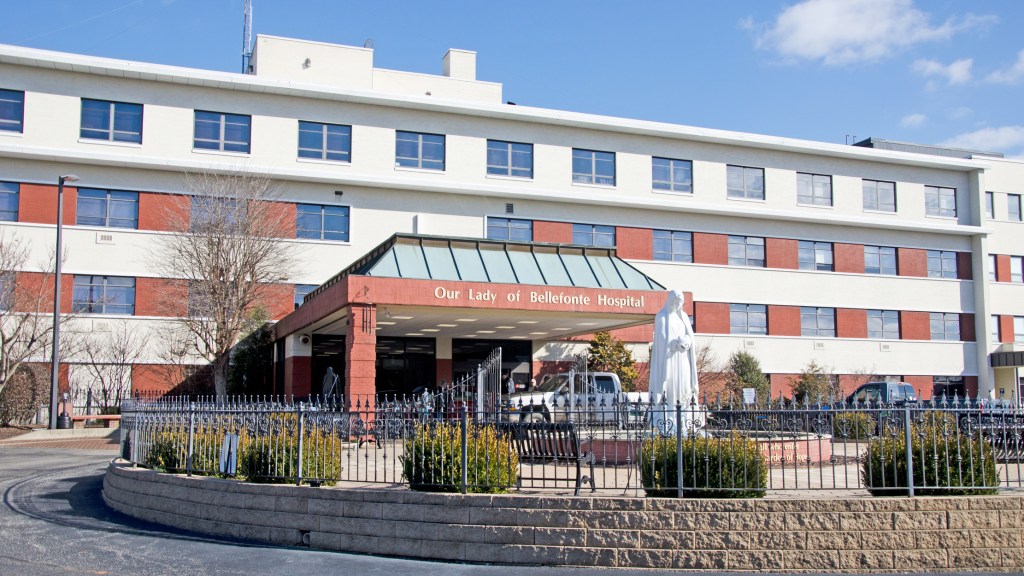 Our Lady of Bellefonte Hospital, seen before its closing. (The Ironton Tribune | Heath Harrison)

Commission trying to find out if such a plan is legal

RUSSELL – A practice of the Greenup County Joint Planning Commission that has stood for decades was challenged at its monthly meeting on Thursday.

Tracy Frye, a Russell business owner and also the city attorney, arrived at the meeting after a discussion and preliminary vote on the subdivision of the Our Lady of Bellefonte Hospital property had taken place.

The vote was to approve subdividing the land and sending the recommendation to the Russell City Council for approval or denial.

Frye said that she didn’t believe the state law, KRS 100, permitted the practice but that the decision of the planning commission should be final.

Tom Saylor, longtime commission chairman, said that there had been two suits in the past on the matter and both had allowed the commission to continue the practice

Gary Green, who represents the unincorporated part of the county and is vice-chairman, said that he had attempted to contact the state attorney’s office earlier Thursday but received no response. He said after the meeting that he made the motion because the planning commission’s two earlier issues, parking and utilities, had been taken care.

The subdivision, which is being requested by Bellefonte LLC, would allow the recovery organization ARC to complete its plan to use the former hospital for inpatient care along with outpatient services. That use is at the heart of many people’s concern.

“We have nothing to do with land use,” he said. “Our job as a commission is to ascertain whether the request meets the subdivision rules of the city of Russell. And it does.”

Saylor said that ARC would only a small number of parking spaces for its employees which would leave 1,329 for opening parking. He said there is also an agreement in perpetuity with other property owners to supply utilities from a central plant.

Forrest Evans, representing the city of Worthington, was among the members to vote no at first. He said his concern was less intended use than carving up the property. He said he believes it has more value as one unit.

Although that first vote was to deny the subdivision, things got sticky when Saylor asked for the reasons for the votes against the request. He reminded the commission members that their only concern was whether the request fell under Russell’s ordinances and that it did.

After some members of the audience also spoke, Saylor continued to wait for a reason for denial. Finally, Evans changed his vote to yes and the subdivision was approved.

Saylor suggested that the commission wait until after a public hearing by ARC at a special council meeting on Jan. 10 rather than having its monthly meeting on the regular date.

Green suggested the commission push back the meeting to Monday 6:30 p.m., in the Russell council chambers, and limit the discussion to the state statute.