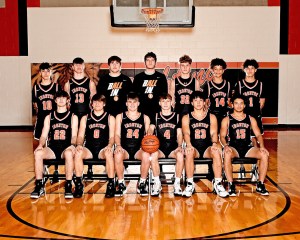 “There ain’t no excuses, excuses babe

’Cause your mama raised you better than that.”

Meghan Trainor had most of it right except the part about mama, at least as Ironton Fighting Tigers’ basketball coach Chris Barnes sees it.

Ironton’s basketball team has only been practicing together for about a week due to the football team’s playoff run to the state championship game.

On top of that, the team will not have the services of center Ty Perkins who will leave school early to enroll at the University of Cincinnati to play wide receiver for the Bearcats. Perkins was all-district and All-Ohio in basketball last season.

Barnes said he met with the team to talk over the situation.

“I told (the players) I’ll discuss this one time. I explained to them Ty may be leaving early, we lost Bailey for the season, we lost Bo for the season. Thank goodness Landen (Wilson) is back.  We weren’t sure about him,” said Barnes.

“I said, ‘Do you think any team we play cares? No. When you step across the line all they see is Ironton and they want to beat you. So, I’m not discussing it again. Somebody else has to step up and play. All summer we played with a bunch of different guys.

“My dad always taught me when you’re hurt or whatever, when you step across those lines, you’re not hurt. Because you better play. It’s real and nobody cares. Don’t act like you’re hurt.”

Despite the losses due to injuries and Perkins early graduation, Barnes thinks the Fighting Tigers still have the potential to be good but it depends on how quickly they can round into shape.

“With the team we have right now, we played in a couple of summer shootouts at Rio (Grande) and a few of other places and we played fantastic. So, there are no excuses and it doesn’t do any good to make excuses. Only losing teams make those. I don’t want to be on the losing side,” said Barnes.

“We’re behind a little bit. We’re young. We’ll just go out there and try to get in shape quick,” said Barnes. “Thank goodness that we did play all summer long and this is their second year around.

The top returning offensive player is all-district and All-Ohio Braden Schreck, a 6-3 sophomore guard who averaged 16 points a game. Another key returning starter is 6-3 senior center Ethan White and 5-10 sophomore guard Shaun Terry will step up into a starting spot.

“Last year, we didn’t know who we had. Braden proved he could score and score big. Shaun Terry should be set for a big year. He’s worked hard all summer,” said Barnes.

“I’m hoping Whitey can play with the confidence of that last game when he had 22 points and 18 rebounds and just play that over as a double-double whether it’s 10 and 10, 12 and 10 or whatever. He can do that. With Ty being gone, Whitey has to assume more of that offensive leadership.”

Retuning to the lineup this season is 6-foot senior guard Tayden Carpenter who missed last season due to a late-season injury in football.

“Tayden is streaky. There were games this summer he had 18 in a quarter, 18 in a half. He finds ways to score. He’s a crafty kid,” said Barnes.

The fifth starter should be 6-1 senior Lincoln Barnes who does a lot of the tough work inside and is amazing at drawing a charging foul.

“He’s our best defensive player inside. He will have to play against the other team’s big and he knows how to do that,” said coach Barnes of his nephew.

“Bryce Markins has shot the lights out in the preseason. He sent me a text after we would leave here for shooting in the fall and the shooting machine was on 999. It turns to zero on a thousand. He shot a thousand shots by himself. He’s little but he can shoot the basketball,” said coach Barnes.

“Amari is a new face but he’s a senior. He’ll defend hard. Landen is our best perimeter defender by far. Tyler Roach is going to have to come in and help out a little bit. He’s a pretty physical kid for a sophomore. Markel Cotton is dunking now, he’s making some moves. He just doesn’t know how good he is.

“We don’t quite have the depth. We had five bigs and now we’re going to have two. Maybe we’ll play a little more junk sometimes and a little zone (defenses) just so I don’t have to take out a couple of guys who pick up two (fouls) in the first quarter.”

With the lack of size, coach Barnes said his team will have to rely on fundamentals and team speed

“We’re going to be faster than almost every team we play. We’ve got that advantage. If we rebound and run, we’ll be fine. I’m confidence Lincoln will screen out and bite your leg off to get the ball. Whitey will do that. It’ll be a five man effort,” said coach Barnes.

The biggest thing Barnes said he and the coaches, players and fans need is to be patient.

“We can’t make up for the 30 or 40 days that everybody else had. We’ve got to be patient. We have get some guys in there and give them a chance and hopefully, come January and February we’ll get things rolling. We’re just trying to win right now and get better.”