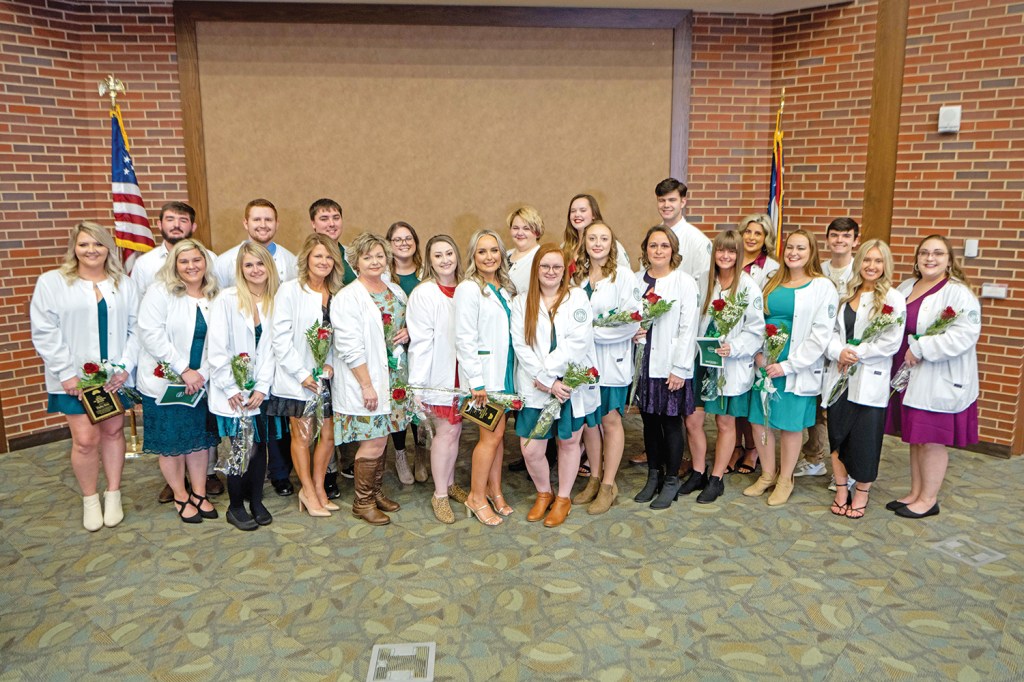 Associate director Michelle Theiss welcomed the graduates and noted the many challenges this class had faced, including COVID-19 moving instruction to online platforms and limiting in person interaction.

“Despite this, they formed lasting bonds and lifelong friendships,” Theiss said.

The Outstanding Nursing award, which goes to the student in the program with the highest GPA, was presented to Jada Miller by nursing professor Beth Delaney.

“The sacrifices we’ve made so far are endless, but so, so worth it,” Miller said. “I’ve had such an amazing experience here and have made friendships that will last a lifetime.”

Two students were recognized for the Spirit of Nursing Award, which goes to students nominated by their peers. The first recipient, who Delaney said was described in nominations as “helpful to all, excellent bedside manner, inspiring, and a cheerleader,” was Cathy Morris.

Morris reflected on her time in the program.

“I’m torn between, ‘it’s finally over’ and ‘I can’t believe it’s already over,’” she said. “We’ve gone from a group of strangers to a small family,” Morris tearfully concluded.

The second recipient of the Spirit of Nursing Award, who Delaney said was described in nominations as “kindhearted, passionate about nursing, and who believes in the other students sometimes more than they believe in themselves,” was Hayley Ross.

Ross described pushing herself out of her comfort zone to pursue a degree in nursing.

After initially having her application rejected, she said she “could not take no for an answer.”

She asked the dean to reconsider and was then admitted to the program.

Speaking of the difficulties faced by her class, Ross said, “if we continue to lean on each other, the challenges are much more manageable,” and thanked her daughter for being her inspiration.

The nursing pin has historical significance, originating from the time when the Crusaders marched to Jerusalem to recover the Holy Land.

Among those Crusaders were the Hospitallers in black robes with a white Maltese cross sewn on the front of the robe. That cross became the symbol of groups who cared for the sick.

Florence Nightingale chose the Maltese cross for the badge worn by graduates of her school of nursing. Today, the nursing pin is a public symbol of work well done.

The Fall 2022 Associate in Nursing degree candidates are: