Tom Browning, who pitched perfect game for Reds, dies at 62

CINCINNATI (AP) — Tom Browning, an All-Star pitcher who threw the only perfect game in Cincinnati Reds history and helped them win a World Series title, died on Monday. He was 62.

The Boone County Sheriff’s Office in Kentucky announced Browning’s death on Twitter, saying he died at his home in Union, Kentucky. No cause was given. 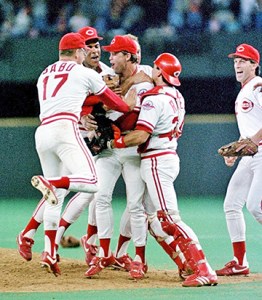 Former Cincinnati Reds’ pitcher Tom Browning is congratulated by teammates after pitching the only perfect game in the history of the franchise. (Photo Courtesy of The Cincinnati Reds)

Sheriff’s Office deputies responded to Browning’s home about 1 p.m. after receiving a report of a man found not breathing. They discovered him unresponsive on a couch, and efforts by deputies and EMS personnel to resuscitate him were unsuccessful. Browning was pronounced dead at 1:13 p.m. Foul play is not suspected, the Sheriff’s Office said.

The Reds issued a statement after being in contact with a member of his family, team spokesman Rob Butcher said.

“The entire Reds family is stunned and deeply saddened to hear of the passing of Tom Browning. Affectionately referred to as “Mr. Perfect,” Tom was a true Red who after his playing days made the Cincinnati area his home and remained heavily involved with the organization,” the club said.

“A fan favorite, the Reds Hall of Famer touched fans’ hearts at team events, Reds Hall of Fame festivities and Reds Community Fund activities. We join Reds Country in mourning the loss of one of our all-time greats, who created so many memories and magical moments for us all. Our deepest condolences to Tom’s family during this difficult time.”

Known as a colorful character, Browning once bolted from the Wrigley Field bullpen and sat in full Cincinnati uniform with Chicago fans atop a rooftop across the street during a Reds-Cubs game in July 1993. He was fined $500 for that stunt, according to The Cincinnati Enquirer.

The left-hander’s biggest individual moment on the mound, however, came when he retired all 27 batters he faced in a 1-0 victory over the Los Angeles Dodgers at Riverfront Stadium on Sept. 16, 1988. 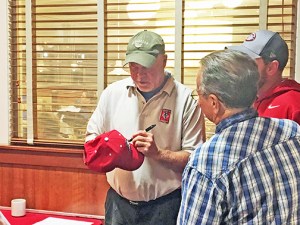 Cincinnati Reds’ Hall of Fame pitcher Tom Browning signs autographs during a visit to Frisch’s BIg Boy in Ironton. Browning died on Monday at the age of 62. (The Ironton Tribune/Jim Walker)

Following a two-hour rain delay, the game started at 10:02 p.m. and took only 1 hour, 51 minutes. It came a little more than three months after Browning lost a no-hit bid in San Diego in the ninth inning on a one-out single by Hall of Famer Tony Gwynn.

Browning’s gem against the Dodgers was one of just 23 perfect games in major league history and the only one for the Reds, baseball’s oldest professional franchise.

Just more than a month later, the Dodgers won the World Series — making Browning the lone pitcher to toss a perfecto against the team that won the championship that same year.

Six times Browning won at least 14 games. He led the NL in starts on four occasions, had six years with more than 225 innings pitched and gave up the most home runs in the league three times.

Browning went 15-9 with a 3.80 ERA in 1990 to help the Reds win their most recent pennant and World Series crown. He was 2-1 with a 3.71 ERA in three starts that postseason, beating the powerhouse Oakland Athletics 8-3 on the road in Game 3 of the World Series to help the Reds pull off a stunning four-game sweep.

Browning pitched 11 seasons for Cincinnati from 1984-94. He broke a bone in his arm during a game in 1994 and finished his career by pitching in two games for the Kansas City Royals in 1995.

“RIP my friend Mr. Perfect Tom Browning,” tweeted Hall of Fame shortstop and former Reds teammate Barry Larkin. “We shared some great times as well as the same birthdate 4/28. You will be missed.”