Carter’s decision to be a Bearcat was no surprise 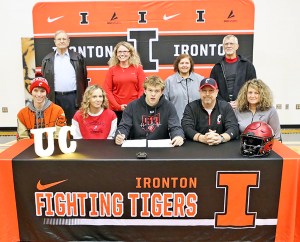 The coaching staff surprised Cincinnati Bearcats fans by leaving for Wisconsin. But Trevor Carter wasn’t about to give any more surprises to the fans.

The Ironton Fighting Tigers’ All-Ohio senior linebacker didn’t waver on his commitment when head coach Luke Fickell left the Bearcats for Wisconsin as he signed a letter-of-intent Wednesday on the first day of the early signing period. 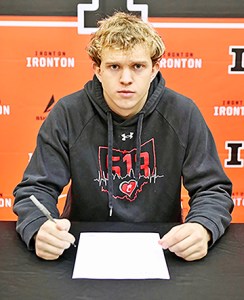 “It definitely was kind of a surprise when everyone got up and went to Wisconsin, but Ive been committed for over a year when that happened and I was just going to stick it out with Cincinnati. I love the city, love the school and love the culture around football. That’s where I saw myself playing,” said Carter.

The move not only affected Carter but his Ironton teammate Ty Perkins who also committed to the Bearcats. Perkins also elected to honor his choice of programs.

That was good news to Satterfield who came to Cincinnati after servings the Louisville head coach.

“They’re winners, both of them, coming from a program that’s winning,” said Satterfield. “I’m excited about what they’re going to be able to. Bring to the table with that work ethic and that confidence.”

Carter knew Satterfield before he took the Cincinnati job which also helped in his decision to remain a Bearcat. Plus, Cincinnati is leaving the American Association Conference and joining the Big 12 next year.

“He recruited me when he was at Louisville. I talked to him as soon as he got the job. It definitely feels good,” said Carter.

“We’ll be in the Big 12 and we’ll be a Power 5 (conference team). Playing in huge stadiums, that’s going to be a cool experience. I’ll be playing there the next year and that’ll be a very cool experience.”

The 6-foot-2, 210-pound Carter was rated a four-star recruit by 247Sports is listed as the highest-rated defensive commitment in program history. He said he is already preparing for the next level.

“After our state (championship) game I immediately got in our weight room and started training. I’ll probably be playing around 230,” said Carter.

Besides knowing Satterfield, Carter also knows his defensive scheme which is also familiar to him.

“They run 3-4 which is good for me because I play linebacker and they like to have four linebackers on the field at all times. It’s similar to what we ran here. I’m used to playing in that and I usually thrive in it,” said Carter.

Getting to the college level is a difficult challenge and Carter’s rise is even more remarkable because he missed last season due to an injury.

“Missing last year has motivated me more to have an ever better season this year. I felt I had a pretty decent season and helped the team get to another state championship,” he said.

After playing a lot of defensive back and running back as a sophomore, Carter was switched to linebacker.

Carter got to play in the state championship games as a freshman and sophomore but was more instrumental this season when Ironton reached the title game again only to fall to South Range.

But with his class racking up 50 wins to make them the winningest senior class in school history, Carter was proud of what he and his teammates accomplish.

“Definitely, it was amazing. This is the biggest one that I’ve played in. My freshman and sophomore years I had a small part. This year I was one of the guys. It was definitely fun to play in and it was an honor to be playing with my brothers,” said Carter who plans to major in business or the medical field.

With success in the rear and a new challenge ahead, Carter reflected on both directions.

“I enjoyed every second, every workout, every practice with all my friends and all these coaches. I wouldn’t change anything about it,” said Carter of his Ironton career.

As for Cincinnati, he said “I just want to go in and just be hard working and be a good leader.”

That should come as no surprise to anyone.