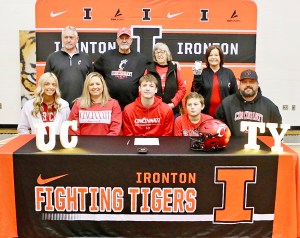 Fortunately for the Cincinnati Bearcats, Ty Perkins has a good memory.

The Ironton Fighting Tigers All-Ohio wide receiver originally committed to the Bearcats when Luke Fickell was the head coach. But Fickell was hired as the new Wisconsin head coach and Perkins was somewhat feeling in limbo until he met with the new UC head coach Scott Satterfield who had been the coach at Louisville. 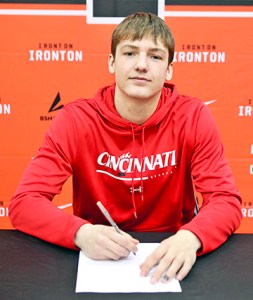 “It really shocked me,” Perkins said of Fickell’s decision to leave UC for Wisconsin.

But then Perkins’ memory kicked in.

“It made my family and I really nervous. But I remembered I committed to Cincinnati because I wanted to play for them so I stuck it out and waited to talk to them and see who they were and they are good people. They do good things, so I’m happy with them,” said Perkins as he signed a national letter-of-intent Wednesday on the first day of the early signing period.

The 6-foot-3, 187-pound Perkins is a three-star recruit who also garnered offers from Duke, Kentucky, Virginia Tech and Applalachian State.

Those receiving skills should be a good fit for the offensive style Satterfield likes to play.

Perkins joins fellow Ironton teammate Trevor Carter as UC recruits and Satterfield is happy to have both signed.

“They’re winners, both of them, coming from a program that’s winning,” said Satterfield. “I’m excited about what they’re going to be able to bring to the table with that work ethic and that confidence.”

Perkins came to Ironton his junior year after being at Lucasville Valley as a freshman and sophomore. He said the transition from a personal standpoint proved easy, but he had to adjust to the rigors of practice and playing in the postseason.

“This place is just different. I felt like I was at home the first day I got here. Everyone was so nice and accepted me. Ironton has a lot of talent and you go against the best in practice and you get better every single day,” said Perkins.

“Last season I was playing in the regionals against (Wheelersburg) and I was aching. My body wasn’t used to it. The year before I played nine games and the year before that I played 10. I wasn’t really prepared so I had to get prepared for 16 games this season.”

Perkins was instrumental is Ironton going 15-1 and reaching the Division 5 state championship game. But Perkins wasn’t about to take credit for what Ironton accomplished during his two seasons playing for the Fighting Tigers.

“I couldn’t have done any of it without my team and my coaches. My quarterback Tayden (Carpenter) is my dude. This season was amazing and one I’ll never forget. I’m excited for what the future holds,” he said.

Perkins also played some defensive back, especially throughout the playoffs. He had 18 tackles with 12 solos and one tackle for a loss. His 3 interceptions tied him with Aiden Young for the second most on the team behind Landen Wilson who had 7.

Perkins has already graduated and will begin his classes at Cincinnati in January.