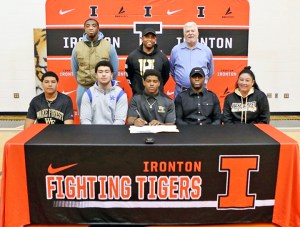 Maybe Jaquez Keyes has a future career as a quick change artist.

The Ironton Fighting Tigers’ All-Ohio senior football had committed to Wisconsin to play running back. But when Wisconsin fired head coach Paul Chryst in early October, Luke Fickell was hired and had different visions of what he wanted in a running back.

With a new head coach, Keyes re-opened his recruiting process and got interest from several schools including Kentucky. 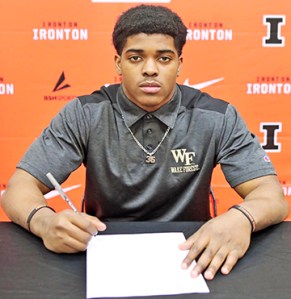 But that process ended with Keyes electing to not only sign with the Wake Forest Demon Deacons on Wednesday’s first day of the early signing period, he not only switched schools but positions as well.

Keyes is now heading to Winston-Salem, N.C., but not as a running back but as a linebacker.

Keyes said a few weeks ago he began looking elsewhere after talking with Fickell.

“They were looking for a smaller, shiftier running back to fit into their passing attack. Coach Fickell had this guy from Cincinnati that he wanted to bring in,” said Keyes.

“Everything worked out. I was recruited by Wake Forest. I went on my official visit and I liked everything. Great players, great coaching staff. They’re an academic school, they’re a football school. I fit right in. It felt like home and they showed me around the place and I loved it.”

When Wake Forest talked to Keyes about playing on the other side of the football, the two-way player for Ironton didn’t hesitate to answer.

“I played there this year and most of my junior year. I’m excited to play. I told them wherever they put me is fine. I just want to play football,” said Keyes.

Keyes is listed at 6-foot, 205 pounds but he is looking to add weight to his frame.

“I definitely want to add weight. I want to be 215, 220. They want to play me at the middle linebacker and also outside,” said Keyes who played both position at Ironton.

Keyes played all 16 games this past season as Ironton reached the Division 5 state championship game before falling to South Range. He had 56 tackles with 12 solo stops. He had 3 sacks and 11 hurries.

Keyes did not play some games at linebacker or only part of the game due to being the team’s leading running back.

As a running back, Keyes ran the ball 173 times for 1,063 yards or a 6.1 yards per carry average. He also scored 21 touchdowns. His biggest carry of the season was a 72-yard touchdown run on the second play of the second half in the state semifinal win over Germantown ValleyView that tied the game and start Ironton on its way to a 35-21 win.

Keyes came to Ironton before his sophomore year when his family from from Mississippi. He said his step-mother was from the area and Ironton’s football tradition made it an easy decision to live in Ironton and one that he is glad he made.

“I had a good time. I had a great high school career. I wish we would have got the job done. I wish we would have won the state championship. I wouldn’t play anywhere else. I love this school. It taught me a lot of lessons and provided me with an opportunity to go to the next level,” he said.

But Keyes is anxious to get to Wake Forest and start the next phase of his life and football career.

“I told the coach before I left I wish I was graduating early,” said Keyes.

Waker Forest was 8-4 this past season and will play in the Gasparilla Bowl Friday against Missouri at 6:30 p.m. on ESPN.