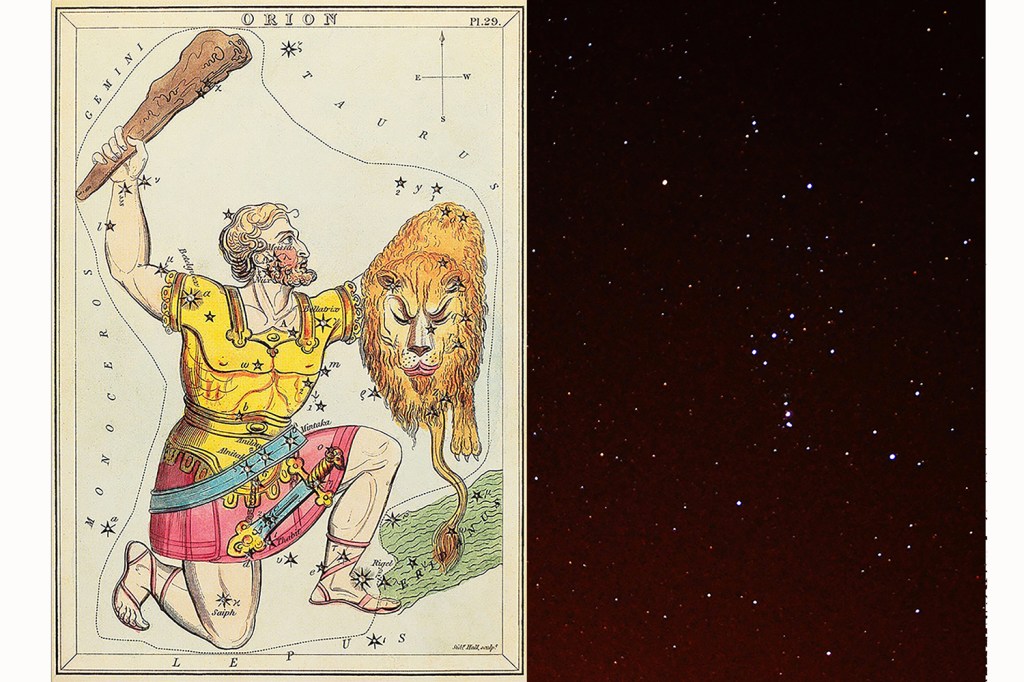 Orion is centerpiece of winter heavens

As life goes by, few things remain the same – friends come and go, people move and jobs change, but one constant is the night sky, with the stars and constellations marching across the heavens, unchanged as they have for centuries. 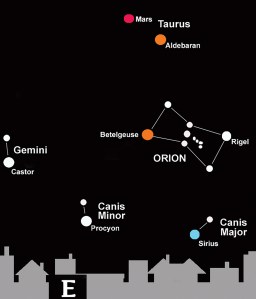 The night sky, at 9 p.m., facing east on Christmas Eve. If conditions are cloudy, or if it’s too cold for you, this chart will be timely for the next few weeks. (The Ironton Tribune | Heath Harrison)

The winter sky is one of particular interest to stargazers, as it features more bright, first magnitude stars than most, and anchoring the display together is the prominent constellation of Orion.

One of the most recognizable in the night sky, Orion, named after a hunter in Greek mythology, is known for the distinct row of three stars that make up his belt, as well as the bright stars that complete the bow tie-like formation.

Orion contains two first magnitude stars (the highest on the scale of brightness), Rigel and Betelgeuse.

Making up the hunter’s shoulder, Betelgeuse is a red super-giant star, near the end of its lifespan. The star is so massive that, if it were placed where our sun is, its surface would extend beyond the orbits of our solar system’s first four planets — Mercury, Venus, Earth and Mars.

As an aging star, Betelgeuse is expected to end its life in a supernova explosion at any point in the next 100,000 years.

When this occurs, the resulting display will be so bright, it will appear as bright to Earth as our moon for about two or three months.

If fact, it is entirely possible this has already occurred. As the star is 650 light years away, it takes more than six centuries for its light to reach earth and the resulting brilliance may be on its way as we speak.

The other first magnitude star in the constellation is Rigel, a blue-white super giant. While Rigel is extremely distant from the earth, at 860 light years, it still shines as a first magnitude star to us because of its high luminosity. Rigel is calculated to shine 363,000 as bright as our sun.

Under the three stars of Orion’s belt are a trail of fainter stars, which make up his sword. One of these may appear fuzzy to observers because it is not really a star at all, but the Orion Nebula, a region of cosmic dust and gases where stars are formed.

Orion begins his climb into the sky early in the night on Christmas Eve, rising to the east, on his side, then going higher and becoming upright as the night goes on. The constellation reaches its highest point at midnight on New Year’s Eve in the southern sky.

Orion will stick around through May, rising higher at the beginning of each night, before setting ultimately in the west as summer nears.

Near Orion are several other prominent, first magnitude stars of the winter sky.

THE DOG STAR: At 9 p.m., as the chart depicts, one can draw a line down from the three stars of the belt and come close to crossing brilliant Sirius.

Located in the constellation of Canis Major (one of the hunter’s dogs, the other being Canis Minor), Sirius is a close neighbor of the solar system at 8.6 light years away and the blue star shines brighter than any other star in the night sky. The star is so bright that a keen observer can even make it out in the daytime under the right conditions.

Other first magnitude stars in the Christmas sky include Procyon, in Canis Minor, Castor, in Gemini and Aldebaran in Taurus.

PLANETS TO OBSERVE: High above Orion, shining even brighter than Sirius is the planet Mars, which is currently in Taurus (Jupiter is also visible by looking to the south at nightfall).

The winter months may bring frigid conditions, but they also produce some of the best night viewing — so bundle up and enjoy our regular Christmas visitors this year.

— Heath Harrison is The Ironton Tribune’s community editor and has been fascinated by the night sky since reading H.A. Rey’s “Find the Constellations” as a six year old.