The man with the golden gun 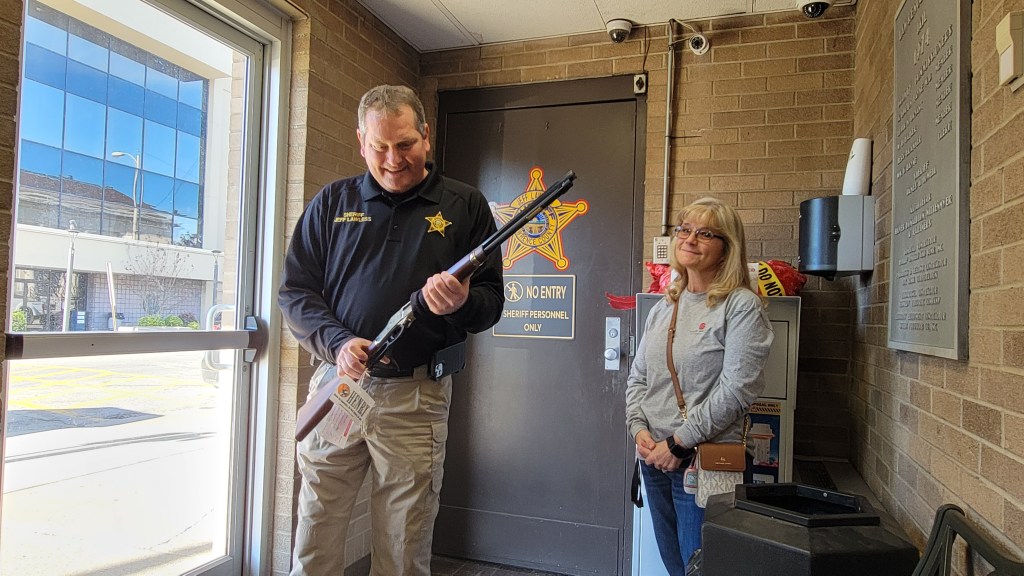 The rifle was wrapped up in festive red paper and yellow crime scene tape.

Todd’s Sporting Goods owner Todd Gillespie presented the present to the sheriff in the lobby of the office since there isn’t much room for a gathering of people in the building.

As he unwrapped the gift, Lawless joked “it isn’t a Red Ryder BB gun, is it?” in a reference to the holiday classic “A Christmas Story” about a boy who wants nothing more than the BB gun for Christmas.

It wasn’t a BB gun, but Lawless was as happy as Ralphie when he opened up the box.

“Oh, my gosh,” Lawless said, as he tore away the paper to reveal the Henry rifle. “I can’t believe it.”

The rifle is a sheriff’s edition with extensive engraving on the golden metal parts.

Lawless thanked everyone and said he was shocked and “I would have never expected something like this… this is an awesome, awesome gift. I am grateful to everybody.”

Shawn Spencer, a clerk for the sheriff’s office, explained that, back in June, a catalog from the Henry rifle company came into the office and Lawless was absolutely taken with the rifle.

“He was drooling over this one rifle,” she said.

She said the office normally gets Lawless something for Christmas, like gift cards, but after the past couple of years they decided to get him something really good.

“2020 and 2021, and now 2022, have been very difficult for everybody, but for this office, in many ways it has been devastating,” Spencer said. “We have deaths, we have had a lot of sickness among the deputies and people nearly died. The sheriff personally lost a couple of good friends.”

Spencer said not only have there been deaths and COVID-19 situation, the deputies and the sheriff had to deal with YouTuber Chille DeCastro and his clout and click-chasing antics when he was in Ironton and Lawrence County.

“Through that whole thing, Jeff has been nothing but a gentleman at all times,” Spencer said. “And we appreciate Jeff a lot.”

After all that, the clerks and officers decided to get him that rifle “because he would never get himself something like that, never. Not in a thousand years,” Spencer said. “Since it was June, we had all sorts of time to collect money from people.”

Since it was ordered, the rifle had been sitting at Todd’s Sporting Goods in Proctorville, waiting for Christmas and for Lawless to sign the paperwork on it.

“That way it didn’t belong to anyone else first,” Spencer said.

Spencer joked to Lawless that the gift was both his Christmas present and the gift for his upcoming birthday.