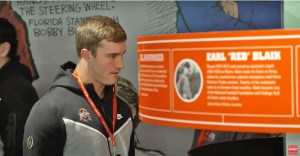 Former Ironton All-Ohio linebacker Reid Carrico views a display at the College Hall of Fame. Carrico and his Ohio State teammates toured the faciity this week during preparations for Saturday’s College Football Playoff game against Georgia.

ATLANTA (AP) — More than one month later, Ohio State players still can’t seem to shake their one loss of the season.

Even though they’re playing for a shot at the national championship in the Peach Bowl’s College Football Playoff semifinal against No. 1 Georgia on Saturday, Ohio State players haven’t moved past their 45-23 loss to rival Michigan on Nov. 26.

The fourth-ranked Buckeyes say the loss has left them cast as the underdogs against Georgia, the defending national champion. Ohio State has lost to Michigan in back-to-back seasons, and clearly last month’s ugly defeat left a mark with players.

“We feel like it’s always been Ohio against the world,” defensive end Jack Sawyer said Wednesday. “We feel like that’s never going to change. So throughout this whole month of bowl prep, our defense has been playing very (angry) in practice, I think the whole team as a whole has been. And I think that’s where we need to be. And like I said, we’re just really focused and really eager to get back on the field Saturday night.”

Sawyer and two defensive teammates, linebacker Tommy Eichenberg and safety Lathan Ransom, each gave one-word “yeah” answers when asked if they’re tired of talking about Michigan. Eichenberg was asked if the Georgia offense reminded him of any Big Ten team.

“Probably wouldn’t say anyone really,” Eichenberg said. “You probably want me to say some team, but I’m not gonna.”

“Yeah. I feel like y’all know the answer to that, but I’m fixing to just say Penn State, too,” Ransom said with a laugh.

Defense was a strength before Ohio State (11-1) allowed 530 yards in the loss.

“It’s definitely made this team tighter,” Eichenberg said. “We were down for a little bit, and then we all came back together and we got stronger. We have each other, and that’s all we need.”

TCU quarterback and Heisman Trophy runner-up Max Duggan has already said he will make himself available for the NFL draft after the Horned Frogs’ College Football Playoff run.

Thanks to his trip to Arizona for the Fiesta Bowl, he’s finally seen an actual NFL game.

The Frogs arrived in Arizona on Dec. 24 to prepare for their College Football Playoff semifinal game against Michigan and went as a team to watch Tampa Bay play the Cardinals on Christmas Day in Glendale, Arizona.

Seven-time Super Bowl winner Tom Brady led the Bucs to a comeback 19-16 win in overtime. The 45-year-old quarterback completed all six of his passes in the extra period.

“It was surreal to see one of the greats, all-time legends, play in person, see what he’s able to do,” Duggan said.

It might be surprising that an aspiring NFL quarterback had never been to an NFL game, but Duggan grew up in Council Bluffs, Iowa, which is about a three-hour drive from the nearest NFL stadium in Kansas City.

Michigan’s in the odd spot of losing two of its five team captains before it enters its most important game of the season.

Quarterback Cade McNamara and tight end Erick All elected to transfer over the past few weeks, committing to play for Iowa next season. McNamara lost his starting job to J.J. McCarthy early in the season and All has battled injuries all year.

Wolverines defensive lineman Mazi Smith said losing his friends hurt, but there were no hard feelings.

“If somebody feels like there’s a situation that’s better for them, you can’t tell them otherwise,” Smith said. “I just hope it works out for the best for them. Those are my brothers. We came in as early enrollees together. We played and worked hard, went through some hard times together.”