Pendleton reflects on the past football year for Ironton 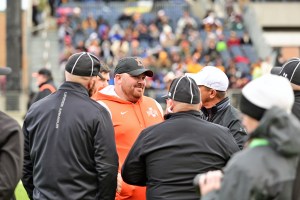 It might have been a long and winding road, but it was well traveled as far as the Ironton Fighting Tigers were concerned.

Like all teams, official practice begins with two-a-days and continues for 10 games. If the season goes well, a team earns a playoff berth.

For the Ironton Fighting Tigers, this season’s road was full of stops, a few bumps and ever some time on cruise control.

Still, it was quite a ride.

As the eyar of 2022 comes to and end, Ironton fifth-year head coach Trevon Pendleton took a few minutes to reflect on the football year and look at those 15 stops where the Fighting Tigers picked a up win before climbing back on the Tiger bus and prepared for the next stop.

“The season is already long enough. Sixteen games in my opinion is a bit too much for high school kids. They’ve love it and we love playing football, so we’re not going to complain about it too much,” said Pendleton.

“Expectations were high going in. They always are at a place like Ironton. Our kids embraced it. They went to work everyday with those same expectations and then, obviously, didn’t get the job done. We’re disappointed in that but not disappointed in the kids at all. Their effort was tremendous all year. They showed up every day and they gave us everything they got and how they worked to get better to their weaknesses and their strengths.”

Along the way the Ironton senior class picked up its 50th career win, a school record for any class. There were record-setting performances by quarterback Tayden Carpenter and wide receiver Ty Perkins. Pendleton said it wasn’t as easy a ride as it might have looked to the average fan.

“Ultimately, they set records here that’s going to take a lot to be broken. So, I’m very proud of them. Fifty win in a high school career is definitely nothing to sneeze at. It’s pretty remarkable, especially with the COVID shortened year. So very proud of them and so very proud of their effort. At the same time, I just wish we could have got it done,” said Pendleton.

Ironton began the season with a 12-3 win over rival Wheelersburg. Pendleton admitted his team looked like it was playing a first game.

Next came the come-from-behind win at Jackson 29-26 followed by a 34-13 win over Fairland, one of the top teams in the Ohio Valley Conference.

All three games were on the road.

“I think this year our kids showed a lot of resilience, whether is was early in the year having to overcome some adversities or later. We didn’t get off to a hot start against Wheelersburg. Obviously Jackson we fell behind significantly at halftime and our kids just had to battle, overcome and persevere. I think that helped us in the playoffs, especially there at the state semifinal against Germantown Valley View,” said Pendleton.

“Obviously, our schedule was a little front loaded this year, but ultimately what it boils down to and what we tell our kids is it’s about us each and every week. No matter who were playing, whether it’s Wheelersburg, Portsmouth or the Cincinnati Bengals, it’s about us and getting better each and every week and doing the things we need to do to execute the game and figure out a way to improve them over the playoff run.”

One of the team’s biggest attributes was their work ethic, but there were other elements of understanding and maturity that helped mold the team and create so much success.

“Our kids understood the challenge ultimately was to get better Monday through Thursday and go out and put on a show and the best product we can put on the field each Friday. I think they really embraced that mentality no matter who the opponent was. It was kind of a faceless opponent. Let’s go out and do the work and be the best Ironton Fighting Tiger team we can be,” Pendleton said.

Ironton will lose 16 quality seniors including Perkins and linebacker Trevor Carter who signed to play for the Cincinnati Bearcats and running back Jaquez Keyes who inked with the Wake Forest Deacons. Linebacker Lincoln Barnes has several offers on the table including a couple of preferred walk-on invitations from Iowa State and Marshall.

Although Ironton will lose a lot of talented seniors, Pendleton said the well isn’t dry and the example set by the senior class has left a lasting impression throughout the underclassmen.

“First and foremost, the senior class was spectacular. But the one thing that they did that not a lot of people are going to see is that they lead and they set a foundation for the program and I think we’re just going to build off of,” said Pendleton.

“These returning seniors now, returning juniors now, returning sophomores now and even incoming freshmen they have some experience now what it takes to be successful, the work ethic and the mentality, everything you need was set forth by this senior class and I think they’re going to build on that and they’re chomping at the bit to get back in and get the ball rolling on everything whether it’s the weight room or some on-field stuff when we get the opportunity, some player-led stuff that I know they’ve already organized and know what I’m talking about.

“They’re excited, so that’s a testament to this senior class the way they conducted themselves and the things they put importance our underclassmen are putting importance on.”

Looks like the Fighting Tigers are already walking on that next long and winding road.