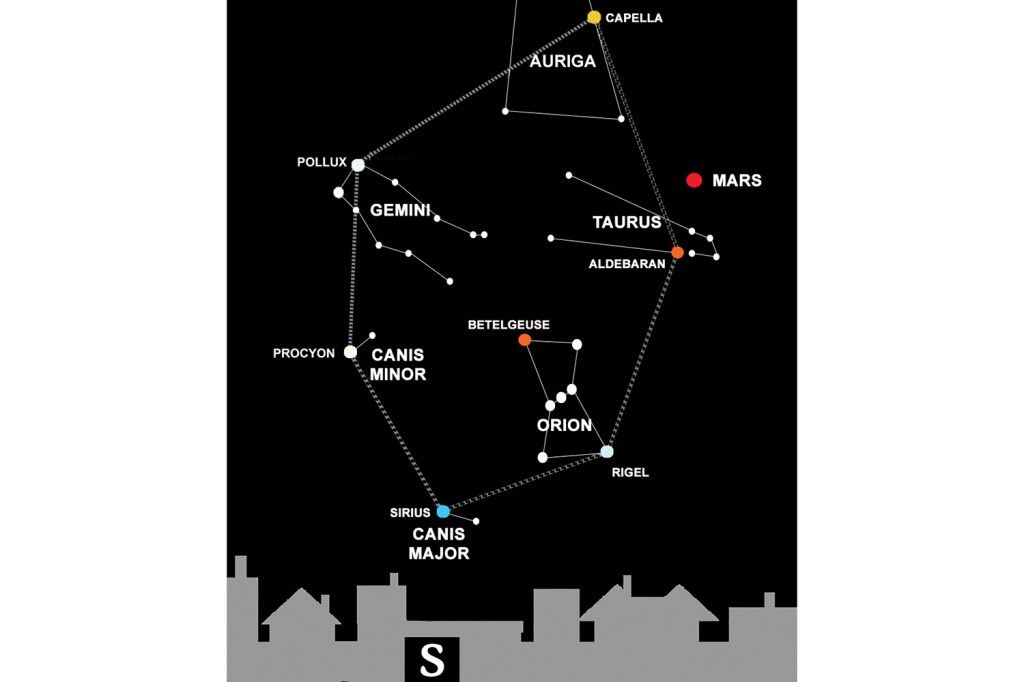 The constellations, as seen at midnight on New Year’s Day, looking south. The dashed lines mark the outlines of the Winter Hexagon, an asterism connecting some of the sky’s brightest stars. NOTE: Fainter stars and constellations omitted from chart. (The Ironton Tribune | Heath Harrison)

At midnight on New Year’s Day, crowds will cheer as the ball drops in Times Square in New York City, while, across the country, fireworks will be set off.

And, at that precise moment, the winter sky will reach its peak. 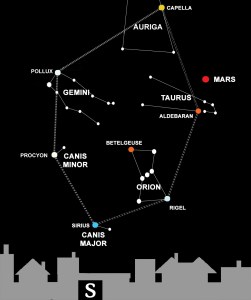 The constellations, as seen at midnight on New Year’s Day, looking south. The dashed lines mark the outlines of the Winter Hexagon, an asterism connecting some of the sky’s brightest stars. NOTE: Fainter stars and constellations omitted from chart. (The Ironton Tribune | Heath Harrison)

Orion, which rises at nightfall, reaches its highest point in the sky and, surrounding it, are the bright stars of the holiday sky, which contains seven of the brightest stars in the heavens.

Stars are ranked by magnitude of brightness and, altogether, there are 20 first magnitude stars, the brightest category, that appear in Earth’s skies.

Of those, all but four are visible from our part of the world (The others require a trip to at least the southern U.S., or more properly, south of the equator).

The New Year’s sky facing south at our latitude contains seven first magnitude stars, the most of any season, scattered between six constellations.

At the center is Orion, the most prominent constellations in the current sky, which contains two first magnitude stars, orange-red Betelgeuse and white Rigel.

Working counterclockwise from Rigel, one can find the other five, which comprise the Winter Hexagon, an unofficial grouping, or asterism, separate from the constellations, which spans most of the southern sky.

At the bottom of the hexagon is blue-white Sirius, the brightest star in all of the heavens, located in Canis Major, one of the hunter Orion’s two dogs.

Going up from Sirius, is Procyon, in Canis Minor, the other dog.

Further above is Pollux, one of the heads of one of two twins in Gemini. Above and to the right, topping the hexagon, at almost the zenith point overhead, is golden Capella, in the constellation of Auriga, the charioteer.

And last, down and to the right is orangish Aldebaran, in Taurus, the bull. It can easily be confused with the nearby planet Mars, which is passing through Taurus this month and shines more brightly than any of the stars.

As the season progresses, the midnight view will occur earlier each night, eventually appearing at nightfall over coming weeks.

The stars of the Winter Hexagon will remain visible until late spring, so take the time to get to know them.

Heath Harrison is The Ironton Tribune’s community editor and has been fascinated by the night sky since reading H.A. Rey’s “Find the Constellations” as a six year old.