Hartman, a three-year starter at Wake Forest, was widely regarded as the top quarterback in the transfer portal. He announced his decision Thursday by tweeting pictures of himself in a Notre Dame uniform. 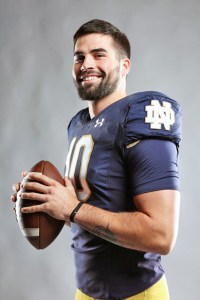 The 23-year-old Hartman holds the Atlantic Coast Conference record for passing touchdowns with 110. He has one year of eligibility remaining.

He completed a career-best 63.1% of his passes this past season for 3,701 yards with 38 touchdowns and 12 interceptions, leading the Demon Deacons to an 8-5 record and a victory in the Gasparilla Bowl on Dec. 23.

Hartman threw 16 TD passes for the Demon Deacons as a freshman in 2018, but was relegated to a backup role the following year, playing in four games and preserving a year of eligibility. He then got an extra year because of the pandemic.

Notre Dame went 9-4 under Freeman, who took over as coach after Brian Kelly departed for LSU. The Fighting Irish began the season ranked No. 5 in the AP Top 25 but lost their first two games. They moved back into the rankings with a late five-game winning streak and are currently 19th. Notre Dame concluded its season with a 45-38 victory over No. 20 South Carolina in the Gator Bowl.