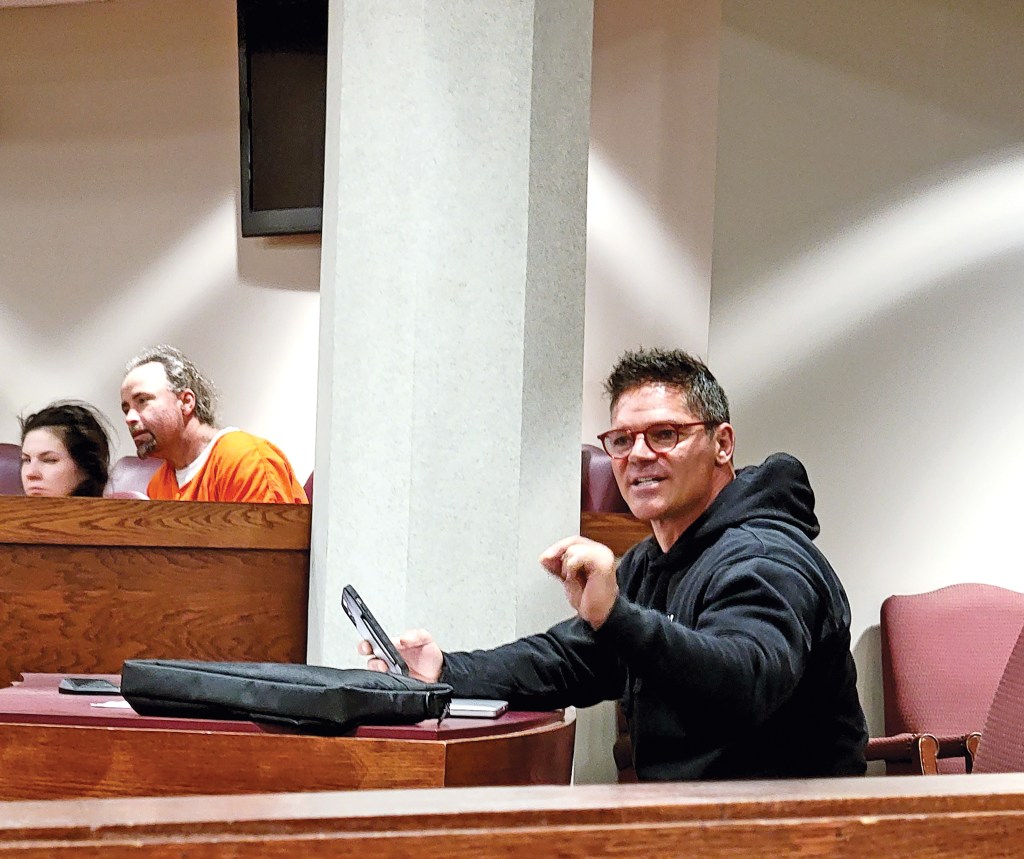 YouTuber Jose “Chille” DeCastro during his pretrial hearing in the Ironton Municipal Court on April 28. DeCastro was supposed to be in the court again on Thursday but did not show up for the second time. A bench warrant was issued for his arrest. (The Ironton Tribune | Mark Shaffer)

A $1 million federal lawsuit filed by a YouTuber against the Ironton Police Department, a sheriff’s deputy and a courthouse employee has been terminated by the court.

Jose Maria DeCastro, who goes by the name of Chile DeCastro, first appeared in Ironton in March to film videos for his YouTube channel, Delete Lawz. After he was arrested, DeCastro filed a suit against several people citing infringement on his constitutional rights.

The case was terminated by the U.S. District Court for the Southern

District of Ohio on Dec. 6 after the defendants made a motion for the case to end because DeCastro wasn’t responding to motions in a timely manner.

In a document from the court, it said “it is ordered and adjudged: defendants’ unopposed motion to dismiss…. and motion for judgment on the pleadings…are both granted, and this matter is closed and terminated from the court’s active docket.”

Despite the ruling by the court that the case was terminated, DeCastro continued to file motions.

On Dec. 7, DeCastro filed for leave to file a response two days late because he hadn’t received a couple of the court’s orders to show cause. DeCastro said that he had a process server attempt to file on his behalf on Dec. 5, but the server arrived at the court late.

The defendants’ lawyer in the case have filed motions that said that DeCastro has been given multiple extensions file a memorandum and that the “plaintiff has ‘engaged in a clear pattern of delay’ by failing to comply with multiple orders of the court. thus, dismissal was appropriate.”

DeCastro has not responded to that filing as of Jan. 4.

The case came about after DeCastro was arrested by the Ironton Police Department on March 29 after refusing to leave the lobby of the Ironton City Center after it was closed for the day. DeCastro was in the lobby to get permission from the city to hold a constitutional law class and then, after being told that the building would be closing at 5 p.m. and he would have to leave, started claiming that it was a protest. DeCastro refers to himself as a constitutional scholar and says that he has been studying the constitution for 20 years.

On April 13, DeCastro sued the officers that were present when he was arrested including police chief Pam Wagner, the City of Ironton, Lawrence County, a sheriff’s deputy who required DeCastro to give his Social Security number when he was booked into the Lawrence County Jail and a Jane Doe, who was clerk at the Lawrence County Courthouse who DeCastro claimed he had a recording of the clerk saying that DeCastro had “been harassing the clerk’s office with vulgarity.”

DeCastro alleged that the police failed to comply with the state’s procedures on protests and rather than escort him out of the building, they arrested him without probable cause in violation of the Fourth Amendment. In the video DeCastro was filming of himself in the lobby, DeCastro was standing by the doors of the Third Street entrance. A clock behind him shows that it was after 5 p.m. when the building is closed for the evening. The lights are turned off in the lobby.

“Here comes all the cops,” DeCastro remarks. “Film them all.”

IPD Chief Pam Wagner then approaches DeCastro, puts her hand up in front of the camera and tells DeCastro to “cease and desist your disorderly conduct or you will be arrested.”

DeCastro attempts to say something and Wagner cuts him off and tells him to vacate the building or be arrested.

“I’m more than willing to go with you,” DeCastro replied.

DeCastro was placed in custody and taken to jail.

DeCastro also alleged a 14th Amendment violation of due process for taking his iPhone that he used to make his videos. He claimed the sim card was missing and a tray ruined.

Thirdly, he alleged a violation of his First Amendment rights, in that he was arrested in retaliation for filming public officials and investigating Ironton.

And fourth, he said that “The Defendants, through their official capacity promulgated the custom practice or policies which enables officers like the defendants to target proponents of First Amendment protected activities, i.e. recording public officials in the city of Ironton and arrest them, unlawfully search, seize and permanently damage recording devices to deter said protected activities.”

In his claims for relief, he asked the court to award attorney fees (which doesn’t apply since DeCastro is acting as his own lawyer,) associated fees and “in the amount of $1,000,000, so as prevent any similar type of deprivation of rights in the future against any other citizen similarly situated.”