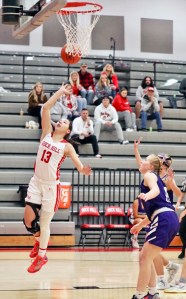 PEDRO — The Rock Hill Redwomen had several different motivations as they took the court Monday night.

The Redwomen accomplished all three goals as they beat the Chesapeake Lady Panthers 59-40 in an Ohio Valley Conference game.

Matthews scored her milestone basket on the second shot of the game. Matthews and Lola Hankins scored 17 points each and Hadyn Bailey had 11 points as the Redwomen not only got the win but help give some comfort to coach Bailey whose wife Amanda’s grandmother Donna Lightly, 89, had died earlier in the day and set off a wave of emotion.

“She was the only grandmother I ever knew and she was so good to our family,” said coach Bailey.

“We talked before the game and we wanted Hazley to get her points. That is something that really has nothing to do with the program and the outcome of the game. It’s a personal accomplishment and it is important for her. She did this on her own and with all the hard work she has put in over the years. We’re proud of her.”

Although the final difference was 19 points, coach Bailey said it wasn’t that easy.

“We had foul trouble and to still win by 19 against a good, scrappy Chesapeake team,” said coach Bailey. “They have four losses and two are to Fairland, one to us and one to Portsmouth. They’re a good team.”

Lola Hankins hit a 3-pointer and scored 9 points while Matthews had 4 points and Hadyn Bailey knocked down a trifecta to keep Rock Hill close.

But in the second quarter, Rock Hill’s defense began to assert itself by holding Chesapeake to just 4 points and take a 32-23 halftime lead.

Hankins had 5 points in the second quarter and Rock Hill was 6-of-11 at the foul line.

Kate Ball had all of Chesapeake’s points.

The Redwomen came out fast and strong in the second half as Matthews hit a trey and scored 8 points, Bailey got 4 points and Josie Kidd drilled a 3-pointer as the lead grew to 47-27.

Hutchinson had a basket and Ball sank 2 foul shots.

“We came out the second half and played really well,” said coach Bailey.

Rock Hill opened up big lead in the fourth quarter before Chesapeake closed the gap as Hutchinson scored 10 points and Ball added a basket.

Hankins hit a 3-pointer while Bailey and Kidd each went 2-for-2 at the foul line in the quarter to prevent any comeback.

“It was a pretty emotional night for us. It was important for us to win,” said coach Bailey. “First, the team came together and focused on Haz.

“But the girls dug down deep to give a little extra to get this win for me. It will make it easier for me to get throw the night. This is a very loving and caring group of girls. I am so proud of them.”