Johnson sworn in for new term 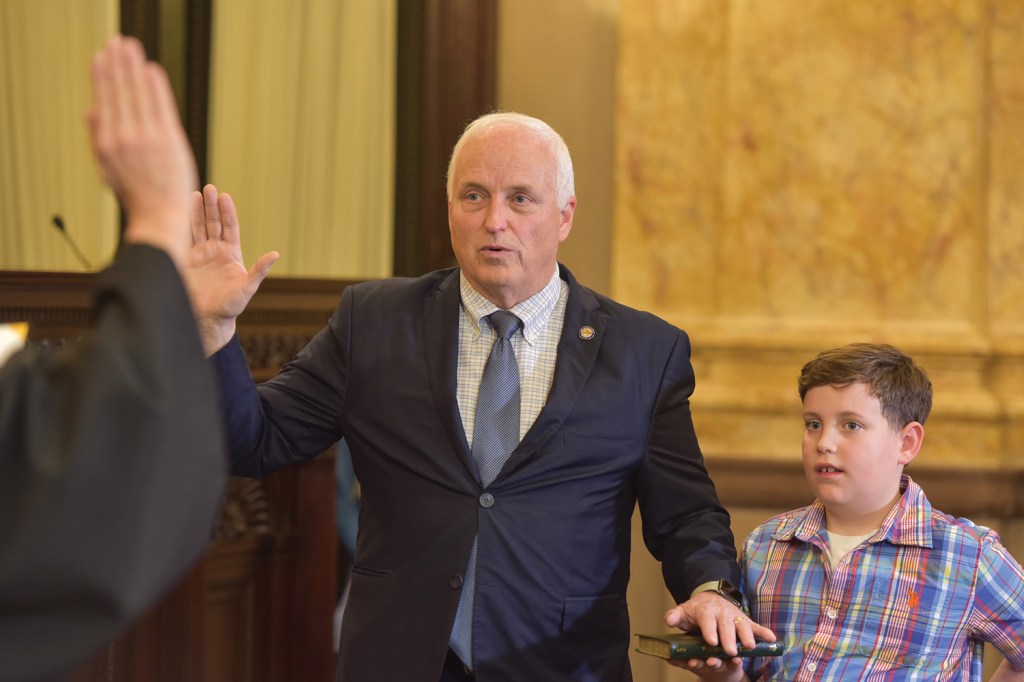 Ohio State Sen. Terry Johnson, R-14, was sworn in to a another term in the Senate. His grandson, Jack, Johnson, held the Bible that his grandfather carried with him during multiple tours of Iraq and Kuwait. (Photo Submitted)

COLUMBUS — State Sen. Terry Johnson, R-14, was sworn last week as a member of the Ohio Senate in the 135th General Assembly for another term.

He represents the 14th Senate District, which encompasses all of Adams, Brown, Clermont and Scioto counties.

“It is a privilege to represent the people of the 14th Senate District,” Johnson said. “I look forward to continuing to work with my colleagues to bring forward thoughtful legislation that improves the lives of the people of Ohio.”

Johnson took his oath of office on the Soldier’s Bible he carried throughout his multiple tours in Iraq and Kuwait as a member of the Ohio National Guard during the Global War on Terrorism.

His grandson Jack held this Bible during Johnson’s oath. Jack, recently elected in his third-grade class as Mayor of “Threetown,” was also sworn into office, using the same Bible.

Johnson’s office noted that he “is a veteran legislator who has championed several key pieces of legislation during his time in the Ohio Senate.

These include restoring and protecting Ohioan’s Second Amendment rights, supporting Ohio’s disabled veterans, investing in Ohio’s Appalachian region, and fighting the scourge of opioid abuse and overdose that is devastating our state.”

His biography states he was commissioned into the Ohio Army National Guard while a fourth-year medical student and attained the rank of colonel in just 12 years.

He ended his military career in 2011 as the Army Guard’s State Surgeon, the highest position attainable for a Medical Corps officer at that time.

Johnson was first elected to the Ohio Senate in 2019. Before that, he was the Ohio House of Representative for the 90th District from 2011-2018.