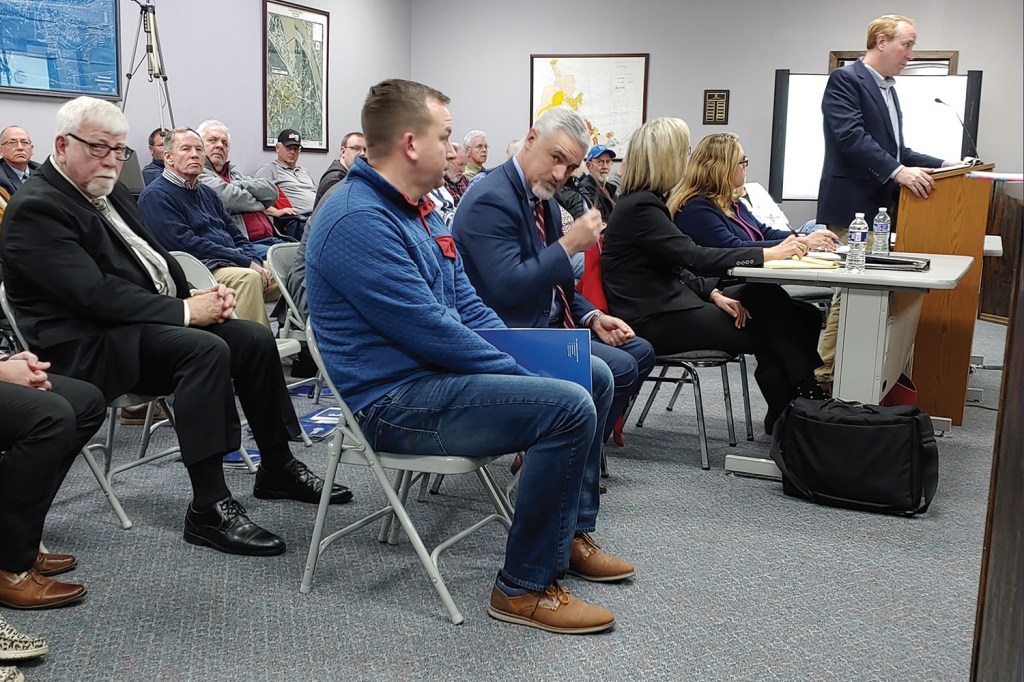 Dr. Danny Bentley, left, listens during a public meeting with representatives of ARC on Tuesday, Jan. 10. Bentley represents Greenup County in the Kentucky House of Representatives and is a member of the health, welfare and family services committee there. (Submitted Photo)

RUSSELL, Ky. – The mood was generally amicable when members of ARC, Addiction Recovery Care, met with members of the public in a session that Russell Mayor Ron Simpson said was long overdue.

The city building’s council room was standing room only for the event, which began with a powerpoint presentation and video by ARC.

John Wilson, ARC’s community CEO, moderated the meeting. He narrated the slides, explaining that ARC is not a rehab facility, but rather offers “crisis to career” treatment to training.

He explained the four phases of the program. The first phase is stabilization of those addicted to drugs and alcohol. The second is recovery and life skills, with taking action toward a new life as the third phase and job skills and education as the final phase.

Wilson said that the center, which will be located in the old Our Lady of Bellefonte Hospital, will be a closed facility with doors that have alarms if opened. He talked about other ARC facilities and their success rate.

“This is not a rehab center,” he said. “At the time when most rehab centers are sending people home, we are moving them into the next phase to prepare for a transition to a healthy life.”

ARC has various training programs to help the clients move into success, he said, citing centers where clients can learn carpentry, auto mechanic skills and other programs. He said about 40 percent of ARC’s staff were once clients.

Security concerns were raised during the meeting, both from residents and about safety of those going to doctor’s offices, the Vitality Center and other facilities on the former OLBH campus. Wilson explained that the ARC center will be self-contained and that clients are not allowed to come and go.

He said that during Phase One, clients have only video visits with families. As they progress to the next phase, they are allowed weekly, one-hour visits which will take place on Saturday or Sunday inside the center. Only in the final phase are clients allowed to leave on a one-day pass.

Wilson explained that anyone who leaves the building without permission is immediately discharged. He said the staff attempts to keep them in the program, but, if they want to go, ARC provides transportation to wherever they may want to go.

There were some heated moments during the meeting. One was when Mike Wilson, a Russell resident and attorney, called on ARC for an answer to whether the company would be responsible for damages to people or property by someone who insists on leaving.

The ARC lawyer basically said no, once that person leaves, they are out of the program and acting on their own.

The second tiff came when Russell city attorney Tracy Frye raised a question about whether the staff would be adequate after the administrative staff went home. She referred to the Bellefonte center as having 500 beds and when told the plan had been scaled back, demanded to know how many beds there would be. When she didn’t get an immediate answer, she said, “You’d think you’d have that off the top of your head.”

John Wilson responded that the number had been in the earlier presentation and would be 300–400. Frye accused him of not giving a straight answer.

An ARC attorney stepped up and suggested Frye give Wilson time to find the answers to her questions.

The city attorney then asked what would happen if all clients decided to leave at the same time in the middle of night and whether there would be enough staff to take care of that.

Jessica Burke, also an ARC attorney, responded with “What’s to prevent the building from blowing up and having a herd of elephants trampling through? You’re testifying, Ms. Frye.”

Frye fired back that she was just trying to make sure those in attendance had the facts.

Some at the meeting were still under the impression that the Russell City Council had the right to refuse ARC to come in. That stems from a joint planning commission meeting late last year in which Tom Saylor, the commission head, said that the group’s practice was to allow local governments to have final say on their decisions.

The actual matter before the planning commission has nothing to do with the tenant. The body is charged with deciding whether Russell’s ordinances allow for the property to be subdivided. Wilson said ARC has not yet closed on the purchase of the old hospital as it is awaiting the commission’s decision.

Council member Don Fraley, a former mayor, said he doesn’t believe government can or should become involved with the decisions of private business, which ARC is.