Lemonade for a Cause

Seven-year-old Lilly Slagel, of Ironton, is already learning the importance of giving back to her community.

Lilly, along with her sister, Georgia Slagel, 8, and friends Tyler Shelton, 9, and Tessa Shelton, 5, all from Ironton, and Hayden Johnson, 9, from Coal Grove, spent Friday selling lemonade to raise money for the Ironton “sprayground.”

The lemonade stand was set up on the parking lot of Portable Solutions Group, where the fathers of the five children are employed.

Elizabeth Slagel, mother of Lilly and Georgia, said the children wanted to do a lemonade stand for fun but didn’t need the extra money.

“Their piggy banks are quite full from summer chores,” Elizabeth Slagel said. “I told them that they didn’t really need any extra cash and that it would be nice if they donated it to some cause.

“We were walking out of Austyn’s the other day, and Georgia looked over and said, ‘There’s the spray park that ran out of money and we weren’t able to finish,’ and I said, ‘Why don’t we donate the money to the spraypark, the Friends of Ironton?’ and that’s how it came to be.”

The sprayground will be located at 301 S. Second St. and will be a water playground of sorts that will be open to the public and free of charge.

As of the end of May, the Friends of Ironton needed between $32,000 and $36,000 to finish the project. Donations have been given since then and an updated total of needed money is being hashed out.

While some may say it seems like the group has a long way to go, Elizabeth Slagel tried to explain to her children they made a difference.

“If anything, it’s good public relations for the spray park,” Elizabeth Slagel said. “That’s what I was trying to explain to Lilly. She was saying, ‘We can’t possibly raise enough money for the spray park,’ and I said, ‘Well, at least you’re showing that you care.’”

Shelly Johnson, mother of Hayden, was proud of the children for what they did.

“I think it’s amazing,” Johnson said. “It’s so generous of them to want to raise money for other kids, so that everybody can enjoy it.”

“It makes me feel good because other kids can enjoy it too,” Hayden said.

Slagel said she thinks it is important to teach children to support their community and to give back and to start it early.

“I felt that we should give it to the spray park because we need to help and be nice to people and stuff,” Lilly said.

Lilly said that before the sale, her biggest concern was getting the lemonade ready quick enough so that people wouldn’t have to wait. Her favorite part, and a favorite of most of the children, was being the sign-dancer for the sale.

“I’ve pretty much watched a lot of people sign-dance and I think it’s kind of weird to sign-dance,” Lilly said. “That’s why I want to do it, because it’s weird.”

Rick McKnight, vice president of the Friends of Ironton, was pleased to hear about the children’s contribution.

“I think it’s fantastic that the kids want it opened that badly that they will work to raise the money,” McKnight said. “I think it’s remarkable.”

Some lessons are learned the hard way

Some don’t know the Bible as well as they should 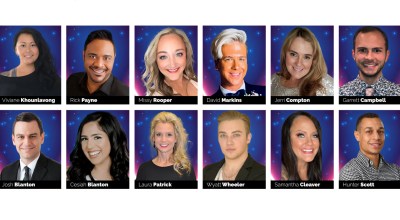 ARTS AND CULTURE: Dancing with Our Stars returns Feb. 5

Yorkie: More than a purse dog