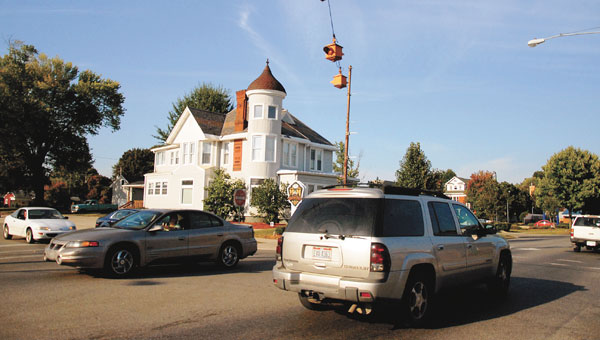 City, ODOT at odds over intersection

A proposed traffic signal for a city intersection could put Ironton at risk to lose more than $1 million in funding for a signalization project, an ODOT spokesperson said.

The Ironton City Council is considering an ordinance to establish the intersection at South Seventh Street and Park Avenue as a three-way flashing red light stop.

But according to a traffic study of the city completed in May 2009, the intersection does not warrant such a signal.

“It’s my understanding that there is no recommendation to make changes to that intersection,” said Kathleen Fuller, public information officer for district 9 of the Ohio Department of Transportation.

Fuller added that putting it up could jeopardize the funding for a signalization project.

The approximately $1.15 million project, which is scheduled for construction in 2012, is completely funded by federal safety money that has been distributed by ODOT.

The project will replace about six old traffic signals in the city. The current equipment is old and costly to repair, Mayor Rich Blankenship said.

“They’re not cheap and ours are old,” he said. “I think they’re going to be replacing six and that’s quite a bit of money.”

The city has accepted bids for the project and interviews will start this week, Mayor Rich Blankenship said.

Council had the first reading of the ordinance at last week’s council meeting. The ordinance is the second of its kind, as an ordinance with the same intent and wording was voted down with a 4-3 vote at the Aug. 26 meeting. Councilmen Bob Cleary, Dave Frazer, Mike Lutz and Councilwoman Beth Rist voted against the measure, while Councilmen Frank Murphy, Kevin Waldo and Chuck O’Leary voted yes.

The original ordinance was sponsored by O’Leary whose mother was involved in a car accident at the intersection. The councilman has argued that the intersection is dangerous and that it is only a matter of time before it is the cause of a fatal accident.

The current ordinance is sponsored by Councilman Frank Murphy.

Currently the intersection has a stop sign and a flashing yellow light on the Seventh Street side. Park Avenue has turning lanes and drivers do not have a stoplight or sign.

The intersection used to have a red, yellow and green traffic signal, but that changed in the early 1990s. ODOT required the city to take it down, streets superintendent Mike Pemberton said.

“That was eliminated and then people had trouble getting across Park and that’s when we put the three caution lights to possibly slow the traffic down,” Pemberton said.

The intersection hasn’t been changed since caution lights were installed, Pemberton said.

Fuller couldn’t confirm that because the timeframe predates ODOT’s method for storing data. The department has no record that the intersection ever had a signal there, she said.

“If, however, a signal did exist at this intersection and if ODOT required the city to remove the signal, it would have been done so based on some type of analysis or traffic study whereby there was a federally-funded project at hand,” Fuller said.

Blankenship has not taken a side on whether or not council should proceed with the signal, saying that he will go along with whatever council decides. He added that the council needs to consider what is at stake, both with the ODOT funding and the safety of drivers in the intersection.

The next council meeting is scheduled for Sept. 23, at which time the agenda is likely to include the ordinance’s second reading.

Consultant: SEOEMS can make it with changes

Despite a report that details continued deficits in its operation the Southeast Ohio Emergency Medical Services got another boost that... read more