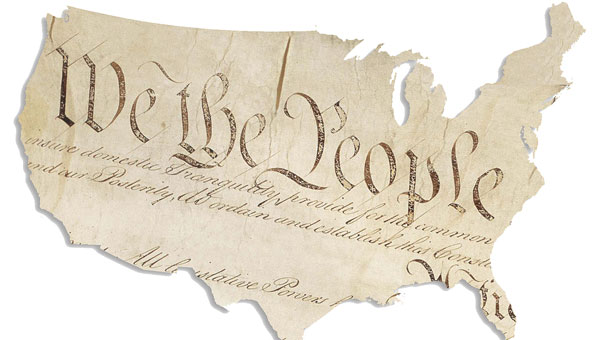 “Give me liberty, or give me death.” Those words echoed in the Bowman Auditorium at Ohio University Southern Friday afternoon.

Patrick Henry Jolly performed a dramatic monologue in front of about 300 attentive high school and college students at the OUS campus, offering insight into the life of his ancestor.

The event was part of a day full of activities celebrating Sept. 17, Constitution Day.

Jolly is a direct descendent of Patrick Henry and has taken on the challenge of sharing Henry’s history with students and communities. He started speaking about Henry at events with the Daughters of the American Revolution about 20 years ago, and then he had another idea.

“About 11 or 12 years ago, I decided to change from talking about Patrick Henry to actually talking as Patrick Henry,” Jolly said.

Jolly said he wants to keep Henry’s accomplishments alive. He did so by sharing insight from Henry’s upbringing and his personal life, as well as the major impact he had on the shaping of the Constitution. 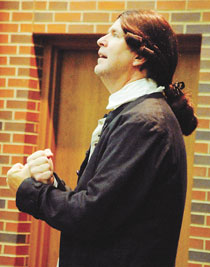 “I believe that Patrick Henry was one of our most influential founding fathers,” Jolly said. “But, unfortunately, he never held a federal position, and never held a political position outside of the Colony or the state of Virginia, so he was kind of forgotten about by American history.”

Jolly also wants to make this generation aware of its importance in this country.

“I get excited when I get to speak to young people, because I want to remind them to stay focused, learn the Constitution, know about it,” he said. “It’s the cornerstone of what this country is built on.”

David Lucas, associate professor of communicative studies, was instrumental in putting the day’s events together. He said those involved wanted to celebrate Constitution Day, but also liked having the students come get familiar with the university’s campus.

While OUS has celebrated Constitution Day in the past with a speaker or a band, this year has been a bigger undertaking. The day included presentations about the Constitution and the Bill of Rights and many other topics by a variety of speakers. Jolly performed his monologue again Friday evening and it was open to the public.

Brandon Moore and Lacee Sammet, both juniors at Dawson-Bryant High School, were glad they were able to see the performance.

“I thought it was pretty insightful,” Moore said. “I learned stuff I didn’t know about him (Henry) and his personal life.”

While Moore said the event was optional for the students, it was much better than the alternative.

“The other option was an assignment,” Moore laughed.

Sammet was impressed with Jolly’s knowledge of Henry’s life and especially enjoyed the personal side that he was able to shed light on. Sammet learned that Henry fathered 17 children and that his first wife battled a serious mental illness.

While history is not Sammet’s favorite subject, she said she sees the importance of it.

“You shouldn’t repeat mistakes, but learn from them the first time,” Sammet said.

Nearest firefighters didn’t respond PEDRO — An accidental fire that leveled a house has sparked a controversy over whether the... read more