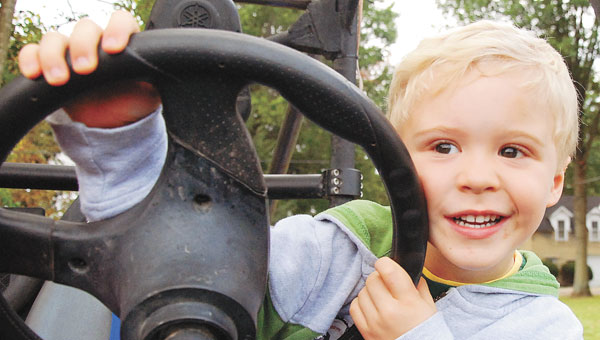 Nicholas Sites does not want to leave the utility vehicle he climbed up on during Transportation Day event at the Early Childhood Center in South Point Thursday morning. During the event children got to take a closer look at a drag race car, motorcycle, fire truck, emergency vehicles and more. THE TRIBUNE/JESSICA ST. JAMES

Wide eyes, big smiles and a whole lot of, “That was awesome!” That’s what was found at the Early Childhood Center in South Point Thursday morning.

Transportation Day is a yearly event for the center where people and businesses from the community bring in vehicles to let the students sit, climb, honk and tour vehicles they don’t normally get to see up close.

Michelle Denning, intervention specialist, organized the event with the help of others.

“We set up Transportation Day as a way to kick off the school year. They are so excited,” Denning said about the children.

Veronica Cameron, an instructor at the center, said she has been talking about transportation for about two weeks, using everything from math charts, measurements of train tracks and color charts, as well as reading countless books.

“We talked about all the vehicles they would see to introduce new vocabulary, to raise awareness of vehicles and follow up with safety,” Cameron said. “It’s great. It’s something the kids love.”

For safety, the students were taught about seatbelt safety, school bus safety and safety on the parking lot.

“The excitement level this morning was like no other this year,” Cameron said.

There was a wide variety of vehicles represented at the Transportation Day festivities. Perry Township and South Point fire trucks, a 7-UP tractor-trailer, a tractor, the Ministry Machine, a sheriff’s car, a motorcycle and an ambulance were among the vehicles the students were able to see up close and get familiar with.

Zane Fennimore, 4, a student at the center, was most excited about the motorcycle and said when he grows up, he wants to drive them.

Zane remembered a few things from the transportation lessons over the past two weeks. When talking about why it’s important to wear seatbelts in cars, Zane said, “So the police officer won’t get you.” He also had some advice for why it’s important to be safe on the bus. “Be careful in the school bus so the people inside won’t squish you.”

Greg Jager, 61, of Coal Grove, brought the Ministry Machine. The van belongs to First Baptist Church in Ironton. Jager said out of all the vans at the church, it’s the pride of the fleet.

Scruff McGruff, the crime-fighting dog, was there, giving hugs and high fives.

Arthur Suiter brought his purple and orange top dragster, and handed out autographed photographs of the car.

The children were allowed on the fire truck, blowing the horn, and in the back of the ambulance, some sitting on the gurney. For Taylor Vanderhoof, 3, the ambulance was the best part.

“I liked the colors on it,” she said.

Commissioners meet with Gallia about SEOEMS