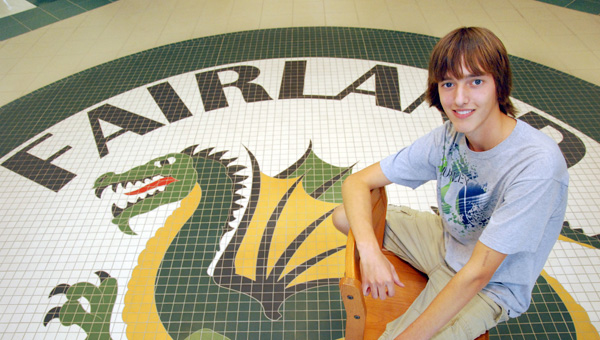 Robert Hinshaw, a student at Fairland High School, has been named a National Merit Scholarship semi-finalist. THE TRIBUNE/JESSICA ST. JAMES

PROCTORVILLE — Robert Hinshaw may only be 17, but already the Fairland High senior has racked up an enviable resume of accomplishments.

And adding to that is his latest achievement: Becoming a National Merit Scholarship semifinalist, one of only 16,000 students in the country, out of the 1.5 million students who enter each year.

Hinshaw learned of that last month when the non-profit contacted Fairland High’s principal with the good news.

“It was great,” he said when he heard.

Semi-finalists are chosen from the scores from the PSAT test juniors take each fall and must be in the top percentile in their home state.

Hinshaw’s next goal is to get named a finalist and become one of 8,400 who have been selected to receive a Merit Scholarship.

This winter Hinshaw was the only student from Lawrence County to be invited to present the findings from his school science project to the American Association for the Advancement of Science. That association is an international non-profit focusing on promoting science. His project was discovering the relative cleanliness of the water that surrounds Lawrence County.

That invitation netted him a trip out to the West Coast and a chance to meet professionals in the field, including Dr. Francis Collins, the physician-geneticist who was the director of the Human Genome Project.

While out there Hinshaw took in the campus of Cal Tech, one of two universities he plans to apply to for early admission. The other is MIT.

“I love both of the schools,” he said. “The campuses are both beautiful.”

His goal is to go into engineering, possible aerospace.

“I am a science and math kind of person,” he said. “I like the application of that.”

The other school choices for Hinshaw are Princeton, Yale and Duke, the alma mater of his father, Greg, a mining engineer.

“My dad went to Duke and he made a big emphasis on grades at home,” Hinshaw said.

Right now Hinshaw is in a three-way tie for first place in his class rankings and has a grade average of more than 4.0. On top of academics, he runs cross country and plays alto sax in the high school marching band and jazz band.

The secret to his success?

As apart of Hispanic Awareness Month, Ohio University Southern hosted a talk on relations between the United States and Mexico.... read more