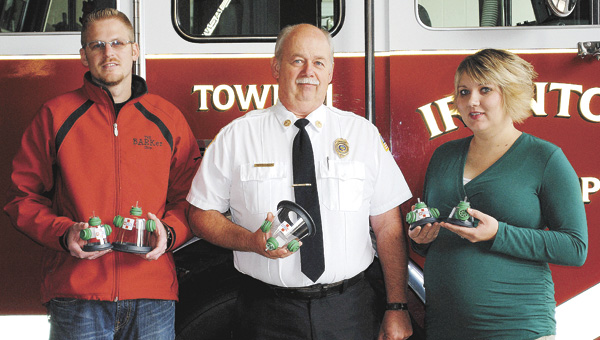 While fire departments do not keep an official count, it has been estimated that roughly 40,000 pets die each year in house fires.

If a fire department has special equipment, it can decrease that number and save the lives of some furry friends.

Kate and Tony Barker, owners of The BARKer Shop in Ironton, donated two pet oxygen masks to the Ironton Fire Department on Monday in hopes of making saving the lives of the four-legged community members a little easier.

Kate Barker, who is 30 weeks pregnant with their first child, said they were in a birthing class when the instructor told them a story in conversation about a time when her house had caught on fire. The fire department in her community had pet oxygen masks and was able to revive her dog.

“I called the fire department to see if they had a device like this,” Kate said. “Pets are like family. You want to get everybody out. Our pets have a better chance of living with the proper equipment.”

“We’ve used pediatric masks before,” Chief Tom Runyon said. “It is a very welcome addition. The pediatric ones don’t work nearly as well as these would.”

Each set of masks comes with a small, medium and large sized facemask. Kate said the masks also work for cats.

“Just about every house has a pet,” Runyon said. “We get the family out first, but we make every attempt to get the pet out and start treatment.” After the pet has received oxygen, it would then be transferred to a veterinary clinic.

“This is fantastic,” Runyon said. “Pets are a member of the family. People are very concerned about them.

“We have actually been on a rescue before where the family says, ‘My baby is in the house,’ and after talking we find out it is their pet,” he said. “They get attached.”

David and Kristina Lilly display the book they wrote with their grandfather. THE TRIBUNE/JENNIFER CHAPMAN CHESAPEAKE — When David Lilly... read more