All treats, no tricks 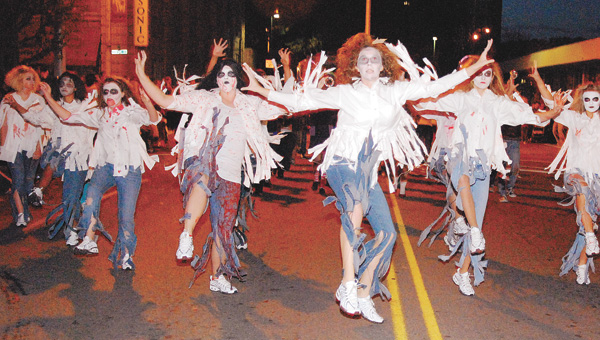 Members of the Ironton Million Dollar Marching Band Guard perform the “Thriller” dance as they participate in the Halloween parade Monday in Ironton.

The streets of downtown Ironton were filled with witches, dinosaurs, clowns and generous businesses Monday night for the annual Safe Trick or Treat.

From 5:30 p.m. until 7 p.m., Ironton businesses participated in the yearly event by passing out treats to children, followed by a parade of costumes on Third Street. Judging for the costumes followed.

While no one is really in charge of the event, Mayor Rich Blankenship, who was passing out candy himself, is glad the city has the tradition.

“I think it gives the kids a safe environment and it gives businesses an opportunity to give back,” he said.

Terri Maniscalco, customer service representative at Rent-2-Own, wasn’t able to participate last year, but is happy to be a part of it.

“This is fun!” she said. “It’s a real experience. I like watching the kids.” She added that she also liked being able to be the one who shopped for the $200 worth of candy for the event. 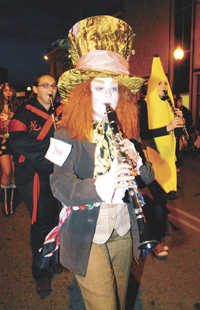 Megan Dalton performs with the Ironton Million Dollar Marching Band as they make their way down Third Street in Ironton Monday during the Halloween parade.

The temperature was in the 70s, with sunny skies on top of that. “You couldn’t ask for better weather,” she said.

Dee Staley, co-owner of Staley’s Pharmacy, loves the Safe Trick-or-Treat for many reasons. Her brother was part of the group who originally started the event years ago. Her mother is another reason.

“It was one of my mother’s favorite things,” she said. Her mother passed away last year, but Staley fondly remembers how her mother liked watching the children, and living in a more rural area, there weren’t many trick-or-treaters where they were from.

“We like Halloween,” she said. “You can dress up and act like a fool and no one cares,” she lauged.

Angela Taylor brought her family to enjoy the activities as well. Her son, Nathan, 1, was content, already enjoying part of his stash, a blue lollipop, in his clown suit.

Sophie Worthington, 10 months old, was dressed as a duck, and rode in a wagon decorated as a pond. Her grandmother, Tracy Colbertson, said she started working on the wagon a couple of weeks ago.

Eric and Nicole Conroy were trick-or-treating with their daughter Julee, 3, who was a unicorn for the evening.

“I think it’s good for the whole community,” Eric Conroy said. “The businesses are sharing in the spirit of another fun holiday.” Eric said Julee told them she liked begin a unicorn so she could fly.

Ryan and Beth Townsend were there with their son, Becket, who is almost 1. The two were dressed as chefs, with Becket as a lobster, being carried by them in a large pot.

“It’s something fun to do, to get out,” Beth Townsend said. “It’s a nice night, and it’s our favorite holiday.”

Deborah Sudderth and Tiana, 3, a princess fairy, and Alexis, 5, a pop-star fairy, were enjoying the evening, and Debroah Sudderth was enjoying the safety she felt from the event.

“We do this every year,” she said. “We don’t have to worry aout going to people’s houses. It keeps them safe.”

Following the parade, the Rotary Club had a team of nine judges with the difficult task of determining the best costumes in five categories, with a first, second, and third place award given for each category. The categories were ghosts, original, ugly, patriotic and witches.

Carlos Ortiz, owner of Casa Grande, stirs some fresh vegetables to help out in the kitchen to prepare for opening... read more