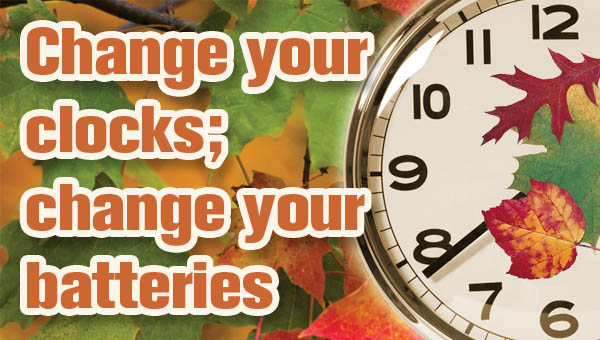 Daylight saving time ends this weekend, and while it means it’s time to set clocks back an hour, it’s important to remember to change the batteries in every smoke alarm and carbon monoxide detector.

Energizer started the initiative Change Your Clocks, Change Your Batteries 23 years ago to remind people to keep their batteries current and their smoke alarms functioning.

The National Fire Protection Association reported nearly 3,000 people in the United States die each year from home fires. A report from the organization for the years 2003 through 2006 claimed two-thirds of home fire deaths were in homes that had no working smoke alarm.

“A working smoke detector is the single most important thing you can do to maintain the safety of your family and home,” said Shane Cartmill, public information officer for the Ohio Division of the State Fire Marshall.

“We want to remind people to change their smoke alarm batteries twice a year, and the perfect time is at the beginning and ending of daylight saving time. He added that when changing clock batteries, people will often have their stepstools out anyway, making it an easy time to make the change.

“A lot of people have a Hollywood perception of fire, that you have plenty of time to get out, that you can see through smoke and you can get out easily,” he said. The reality is that there is often only a couple of minutes to get out and smoke alarms help that. He said it can take as few as three minutes for a room to be fully engulfed in a fire.

Cartmill stressed the importance of having a plan for when an alarm goes off. Practicing the plan often, and making sure each person in the house knows two ways out of each room is important. He said a plan needs to be made for young children, the disabled and the elderly in the home as well.

“Smoke alarms typically retail for less than $10; however, we know some people can’t even afford this small investment,” he said. He said for those who can’t afford it, or need help installing it, to notify their fire department who can either supply them or make recommendations on how to obtain one.

Carbon Monoxide detectors are life-savers as well, and also need to be functioning properly. Making sure the batteries work in these also saves lives, as the Centers for Disease Control and Prevention reports more than 400 people die in the United States each year from carbon monoxide poisoning.

The CDC reports carbon monoxide is produced by furnaces, generators, stoves, lanterns, gas ranges and burning charcoal and wood. This gas is invisible and odorless, making it nearly impossible to know you’re breathing it without a detector.

This Saturday, singing, auctions, food, a yard sale and raffle tickets are all working together to provide entertainment for the... read more