Children get meeting with their hero 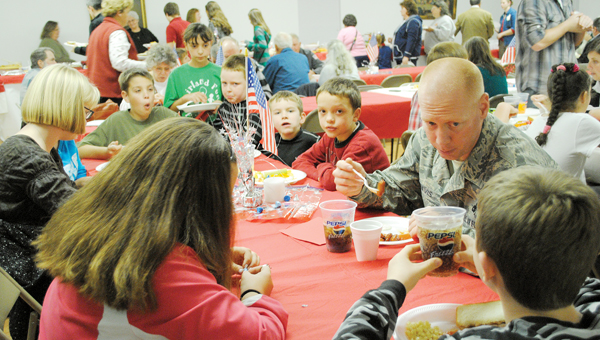 Chris Davis sits at a table with the children of Windsor Independent Bible-Believing Church, answering questions about military life and his personal interests. The children had written Davis notes and sent care packages while he was serving in the Air Force in in Afghanistan. THE TRIBUNE/JENNIFER CHAPMAN

When Chris Davis was working on an aircraft in Afghanistan, more than 7,000 miles away from his home in Norcross, Ga., and his wife and three sons, one of the things that put a smile on his face was a care package and handmade cards he received periodically.

Those cards and goodies came from children at the Windsor Independent Bible-Believing Church, many of whom Davis had never met until Saturday night.

The church planned a special service to honor veterans, and to pay a special tribute to Davis, who has been in the Air Force for 18 years and has just returned to the United States after his most recent tour. Davis is thankful for every shipment the children sent over to him.

“I can’t tell you what the boxes and children’s cards meant to me, and the servicemen over there with me,” Davis said to a packed church Saturday night. Toward the end of the service, after songs and the Pledge of Allegiance and a slide show of local veterans, Davis spoke and then was able to give hugs to the children who had taken the time to write him and pray for him while he was away.

“I’ve got every one of them,” Davis said with a smile.

Davis said he wanted to take the time to meet the children because they took the time to do so many nice things for him.

Dianna Duncan, 52, of Proctorville, is a cousin to Davis’ wife and has been helping the children at the church send care packages to shut-ins and soldiers for years.

“The kids make the cards and fill them in with scriptures and stickers and whatever the kids want to say,” Duncan said. She said they feel it’s important to do that to cheer people up and to provide encouragement. Some of the things included in the packages are snacks, shampoo and conditioner, toothbrushes and toothpaste, wipes, deodorant, phone cards and anything else they could fit in the box.

“We support our troops and want them to know we love them,” Duncan said.

After the service, people stayed for food and socializing, and Davis sat at a table with the very children who had written him cards during his time away. The children lobbed questions to Davis the rest of the evening, asking him everything from what kind of food he was able to eat while he was gone to what kinds of planes he flew and what kinds of sports he liked to play. Davis smiled and answered each one, treasuring the moment.

Kelly Begil, a sixth-grader at Fairland Middle School, was one of the children who made cards for Davis. She remembered the notes she wrote to him.

“I said, ‘We love you and we are so glad you are helping America solve this problem with the war,’” Kelly said. She said she wants to be a pharmacist when she grows up and hopes she can do that in the military. She was thrilled with the opportunity to meet Davis face-to-face.

“I’m excited because I’ve never met him and I love his family and have known about him for a long time,” Kelly said.

Kyle Rankin, a third-grader at Fairland West Elementary, is a cousin of Davis’ wife, and while he has met Davis before, it had been a long time since he had seen him. He said he prayed for Davis a lot while he was away.

Kyle said he wants to be in the Army when he grows up and thinks a lot about soldiers in the military.

“They’re cool and I’m glad they’re fighting for our country and helping American be a better place,” Kyle said.

It’s been a tradition for the past 15 years to help out the children in Lawrence and Scioto counties at... read more