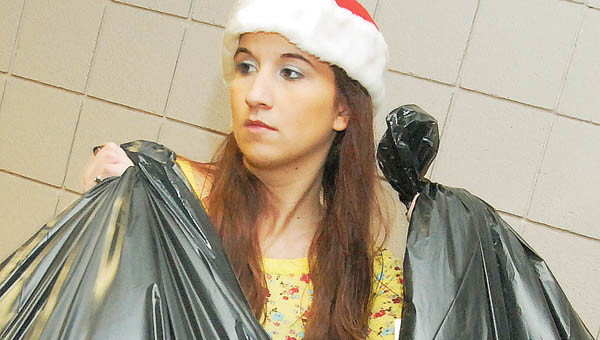 Emily Kerns, president of the Beta Club at Symmes Valley High School, loads bags of wrapped presents into waiting vehicles. Students have organized an Angle Tree to help those in their district during the holiday season.

The club has organized an angel tree for the past 10 to 12 years, but for the last two years the club has chosen to help Symmes Valley Elementary students’ families specifically.

The elementary school guidance counselor and school nurse helped determine the families with the greatest need, and a paper angel was made for each child, with a first name, age and Christmas wishes written on it.

Teachers, parents, students, cooks and bus drivers all were a part of helping the families out, giving them wrapped presents for the children to open on Christmas.

Thursday morning, the presents were distributed. Members of the Beta Club carried the presents out to the cars of some very thankful parents.

“I think this is amazing,” said Shanda Rice of WillowWood. She is the mother of three, ages 5, 7 and 9. “It would have been hard to have presents without it.”

Tonya Myers, also of WillowWood, is a home-health worker and mother to two daughters, ages 7 and 10. She said her daughters were not asking for big things this year, just hoping for some Littlest Pet Shop figures and some Justin Bieber things. She is very thankful for what the club has done for her family.

“It is really great,” she said. “There are a whole lot of kids who wouldn’t have anything without it.”

Emily Kerns, senior, is the Beta Club president and was very glad to be a part of the project. She said one of the things she enjoyed the most was when a mother had brought her young son who isn’t in school yet with her.

“He looked so excited,” she said.

Zac Runyon, senior, is the Angel Tree chairman. He said he most enjoyed the heart-felt “thank-yous” he received when taking the presents to the cars.

Emily said some of the children had wanted things like she would want at Christmas, like an Xbox, but others wanted such simple things.

“Some just wanted a puzzle,” she said.

Ken Shipley, a chemistry and physics teacher, is pleased with the effort of the students.

“We wanted to have 60 children and the list kept getting bigger and bigger and we were able to meet the need,” he said. “This has been rewarding because we are helping people we know.”

Shipley was happy with all of the people who came together to sponsor the children.

“We have got lots of Santas in Symmes Valley,” he said.

Darrell Humphreys, principal, says students learning the importance of community service is a good benefit of this project.

“I think it’s great that we have a group of students willing to give back to the community,” Humphreys said.

Humphreys said he is thankful for the work Shipley did in this event and for everyone who donated to the project.

The Metrodome roof collapsed under the weight of snow from a winter storm in Minneapolis, Minnesota, Sunday. The roof collapse... read more