‘Cover up’ provides clothing to kids 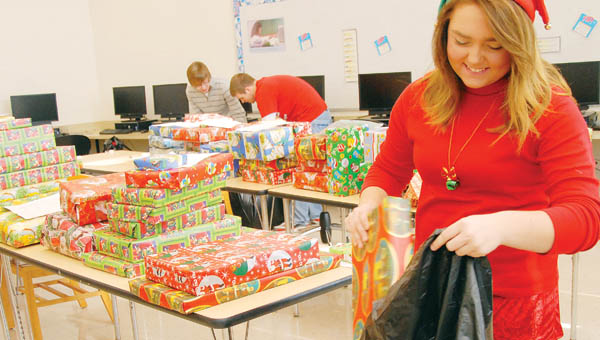 RHHS students helping others this Christmas

The National Honor Society students at Rock Hill High School have shown that it is more blessed to give than to receive.

The students have been working since October to raise money to purchase coats and other items of use for 40 students at Rock Hill Elementary School for a project titled The Big Cover-Up. The items were distributed Wednesday morning at a Christmas party for the students.

Through a bake sale, local business donations, raffles, a dance and a $1,750 grant from the United Way, the students were able to raise more than $4,000 for the project.

Krista Lambert-Hayes, ninth grade world history teacher, found out about the United Way grant, and apply for it and the project started from there.

The original plan was to just purchase coats, but with the hard work of the students, more money was raised and instead of setting the money aside to help pay for a class trip, the students wanted to give more to the students. They gave each of the 40 students a stocking and had a pizza party, complete with high school students dressed as elves and reindeer, as well as a Santa.

“I’m so proud of them,” Lambert-Hayes said. “They have worked so hard and put in so much time.”

She said the students put in a lot of extra time for schoolwork in the evenings to make up for class time devoted to the project, and a lot of time wrapping presents and shopping for the children.

Shayla Stevens, 12th grade, was very involved in the project.

“I’m glad we are able to do it,” Shayla said. “They all got really good Christmas presents. It started out as coats, but we got them so much more.”

Slowly but surely the Young Professionals are reaching their goal of playing Secret Santa to about 650 children this Christmas.... read more