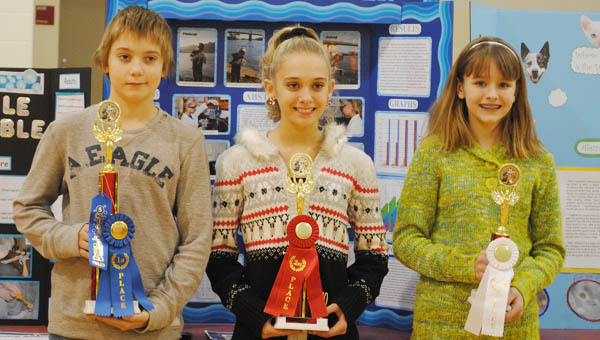 Rock Hill Middle School students showed off their scientific know-how Wednesday in the yearly school science fair in the gymnasium.

The students had been working on their projects for two or three months as part of their grade and were able to set them up for judging for extra credit Wednesday morning. Judges graded the projects on several areas and the scores were tallied, with the awards given in an afternoon presentation.

“I think they did well,” said Kathy Gore, 7th grade science teacher. “There’s every level of projects set up here. There are some that had some great ideas.”

A project by Alaina Brown, 6th grade, tried to answer the question, “Whose mouth is dirtiest? A dog, a cat or a horse?” She swabbed the mouths of each animal and let bacteria grow for six days, then measured the bacteria, discovering that the dog’s mouth had the most bacteria.

Another project tried to find out if plants grow better with hydroponics than with soil. Sixth-grader Blaike Roberts planted and grew plants for nearly a month, measuring every three days and determined that the plants grown with hydroponics were larger, grew faster and looked healthier.

Randy Franz, fair judge, joked, “When I was their age, I wasn’t nearly this smart.”

Franz said there were several projects that impressed him.

“I think they have really done a super job of understanding the scientific applications of the experiments,” Franz said. “It gives you a lot of hope for the future of our young people. Education works.”

“We’re proud of all of them for the effort.”

Lawless said some of the projects helped to educate the judges as well.

While 90 students had chosen to set up their projects for the fair, some weren’t able to make it because of the weather. Gore said one of the biggest fears students have about the science fair is being interviewed, which is only required at the school level when a judge needs to ask the student a question.

The first place trophy went to sixth-grader Matthew Williams, who studied whether a soap bubble could last longer if certain ingredients were added. The winning ingredient was glycerin, which produced a bubble lasting 3 minutes and 19 seconds.

“I’ve never really won first place before,” Matthew said. “I like it.”

Those students and 13 others will represent Rock Hill Middle School in the Lawrence County science fair in February.

“Every year, I learn from their projects,” Gore said. “I would never pick a favorite. I have a lot of them that I like and I am proud of each of them.”

A Proctorville man will serve nearly 10 years in prison for charges including burglary and grand theft. Kiah Maynard, 18,... read more