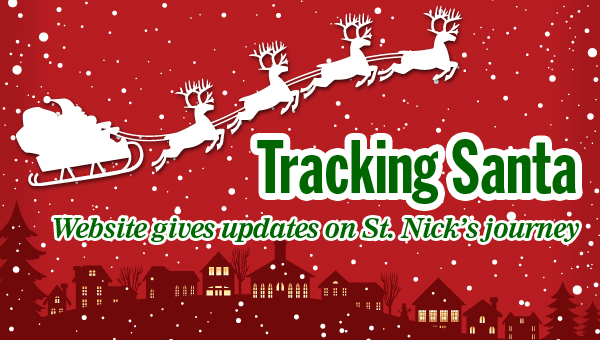 Santa Claus has a long way to go and a short time to get there. For anyone wondering about his progress and about when to have those cookies setting out, the North American Aerospace Defense Command, or NORAD, provides a way to track him during his journey.

In 1955, a Sears Roebuck & Co. advertisement mistakenly printed the number for NORAD, which was then the Continental Air Defense Command, on their flier as the number to talk to Santa. Not to disappoint, they checked the radars for Santa and gave children updates as they called in, and have been doing it ever since.

To ensure accuracy, NORAD uses four tracking systems to locate Santa, beginning with the North Warning System, with 47 radars strategically placed across North America. He is also tracked by satellites, which detect heat from the red glow of Rudolph’s nose.

The third way of tracking him is by the use of Santa Cams, taking pictures of him as he flies around the world.

The fourth way is fighter jets, welcoming him and flying alongside him by Canadian and American fighter pilots.

While waiting for Santa to make his way to their neighborhood, people can play games on the website and also have some questions and mysteries about Santa finally answered and explained.