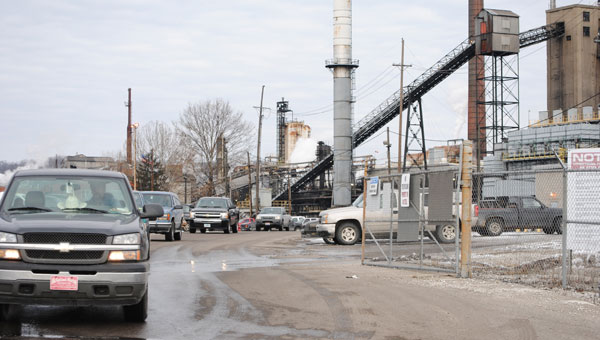 Workers at AK Steel’s coke plant in Ashland, Ky., leaving at the end of their shift Tuesday. The announcement was made Tuesday that the plant will be closing in 2011.

ASHLAND, Ky. — AK Steel announced Tuesday it plans to close its Ashland, Ky., coke plant permanently in 2011, a decision that will affect its 263 employees.

Procedures for the closure will begin immediately and be completed early in the second quarter of 2011, according to a press release from the company.

Barry Webb, financial secretary for Local Union 523 District 8 of the United Steelworkers of America, said his reaction to the news was “shock and disappointment.”

Webb, of Grayson, Ky., is a 14-year employee with the coke plant. He was at the plant Tuesday when the announcement was made.

“It was something that had been discussed but everyone was hopeful that there could be something worked out to extend the life of the plant,” Webb said.

Webb said the union plans to meet with officials Jan. 6 to discuss employee jobs. As of now the company plans to close April 1. Webb said he still hopes something can be done to save the plant in the meantime.

“It’s a slim chance,” he said. “We have been in contact with state legislators and will continue to stay in touch with them. (AK Steel) is projecting an April 1 closing date and I say we don’t give up until April 1.”

The company said it would attempt to find jobs elsewhere in the company for the workers.

Ray Finley, 54, of South Point, has been a contracted employee at the plant for the past three years. Finley blamed the Obama Administration and the Environmental Protection Agency for the closure.

“It’s sad that the federal government is going to let the American people starve,” while jobs go to China, he said.

The company said increased maintenance and increasingly stringent environmental regulations have made the plant, which produces the black furnace fuel for the company’s iron- and steelmaking facility, not cost competitive.

As a result, the total per-ton cost of coke produced by the plant is significantly higher than all other sources of coke for the company. Replacing the plant’s high-cost coke will help make the balance of AK Steel’s Ashland Works more competitive, it said.

The company has secured alternative sources of coke to meet the needs of its blast furnaces, it said.

Beside retirements, all of the jobs at the plant have medical benefits and the loss will affect the city’s medical community, Webb said.  Additionally, the plant uses approximately a million gallons of water each year and employees pay $500,000 in payroll taxes each year, Webb said.

“We are deeply disappointed by AK Steel’s decision to close their coke plant,” Beshear said in a written statement. “The operation has been a source of more than 200 good-paying jobs and its closure will have a hard-felt impact on those affected.

“In addition to discussions with AK Steel led by the Economic Development Cabinet, I personally spoke with senior leadership of AK to offer Kentucky’s assistance to keep the coke plant open, including economic development tools that could have helped them to re-invest in their operation.

“Ultimately, the company determined that the costs to upgrade the facility were prohibitive and would make it non-competitive,” Beshear said.

“While this news is disheartening, we are still appreciative of the steel operations AK maintains in Eastern Kentucky, and we will continue to actively assist AK Steel in sustaining and growing those operations.  In addition, we will aggressively pursue any and all other future opportunities to grow employment in the area.”

The company said it would incur an $80 million pre-tax charge, which will be reflected in the company’s fourth-quarter financial results. About $50 million of the charge will be non-cash relating to the write-off of the property, plant and equipment.  The rest of charge will be cash payments made over several years, of which about $18 million relates to employment costs and approximately $12 million relates to closure costs.

“AK Steel recognizes that this is a difficult time for the employees who are affected,” James L. Wainscott, chairman, president and CEO of the company, said in a statement.

“We are committed to helping them as much as possible during this transition, including, where possible, placing them in jobs available elsewhere in Ashland Works or other operations within the corporation. The Commonwealth of Kentucky has been very supportive of our goal to make Ashland Works more competitive and we appreciate those ongoing efforts.”

Even cars get winter blues

The winter weather can take its toll on a vehicle, from accidents to paint damage and a frozen engine, but... read more