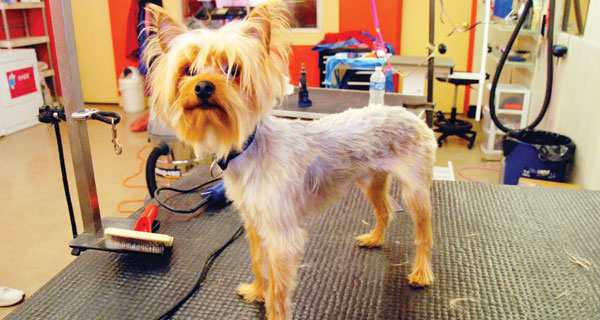 After his trip to the doggie beauty parlor, The Barker Shop located on South Third in Ironton, and a trip to veterinarian’s office, Taz will be reunited with his owner in Florida.

Taz may look like Toto, Dorothy’s beloved dog in “The Wizard of Oz,” but he had to do more than click his heels to get back home.

The two-and-a-half-pound Toy Yorkie was taken from Maria Sicard’s home in Delray Beach, Fla. Dec. 23 and recovered at a residence in Chesapeake Thursday.

A man driving behind a white Chevy conversion van with Ohio tags witnessed someone in the van stop, pick up the dog and leave the area.

The witness placed an advertisement on Craigslist about the incident, which Sicard saw and responded to.

Sicard and her three children were distraught that the dog was missing. Her youngest, an 11-year-old boy, cried so much he made himself sick, she said.

After contacting her local police department and filing a report, Sicard contacted her local Bureau of Motor Vehicles, which informed her that the van was registered in Lawrence County.

Sicard called the Lawrence County Sheriff’s Office Tuesday. The office tracked the license plate number to a residence in Chesapeake.

Detective Jason Newman met with the man who lives there, who told him that he and a friend were vacationing in Florida when they saw the dog roaming the streets. Out of concern for its safety, the resident said, they picked it up and took it home with them.

The man willingly gave the

dog to the detective.

The canine, which was in good health, was housed at the Lawrence County Animal Shelter.

Petland in South Point verified that the animal belongs to Sicard using a microchip implant.

“I started screaming,” Sicard said when Newman told her the news. “I was in my office. People must have thought I was crazy. I was jumping up and down and screaming.”

Sicard, who works near her residence, ran to tell her family the news.

“We must have blown up his ear,” she said.

Delta Airlines has agreed to fly the dog home.

“Our concern was for the welfare of this canine,” Sheriff Jeff Lawless said. “We are happy that we can return this family pet to its rightful owner which will make their holiday season a little brighter.”

Before the dog went home, though, he got some show dog treatment at The Barker Shop in Ironton.

Barker Shop owner Tony Barker gave the dog a haircut before it went for a checkup.

“He had some mats in his hair,” Barker explained. “He had some fleas. We’re just kind of making him comfortable until he gets home.”

The Proctorville Animal Clinic gave the animal a checkup.

“The airline requires it, not only for infectious disease-control, but pets have to be healthy to sustain certain conditions in a plane,” Dr. Mike Dyer, of the animal clinic, said. “We want it to be healthy to fly. We want to make sure the little guy is all right.”

Petland is providing the items necessary for the animal’s flight, Lawless said.

Sicard said through it all she knew she would be reunited with her dog. Having the tag number was a good start.

“There really are good people out there,” she said. “Detective Newman is one of them. And the eye witness didn’t have to go above and beyond.”

She said her family is glad to start off the New Year with happy news.

The sheriff’s office has filed a receiving stolen property report against the pair, Lawless said. The prosecutor’s office will have to decide if there will be formal charges.

It is the standard policy of The Tribune not to name individuals until they are formally charged.

So, what’s your New Year’s resolution?

Now as the New Year approaches, that time for fresh beginnings, what have those so often in the public eye... read more