They’ve still got it 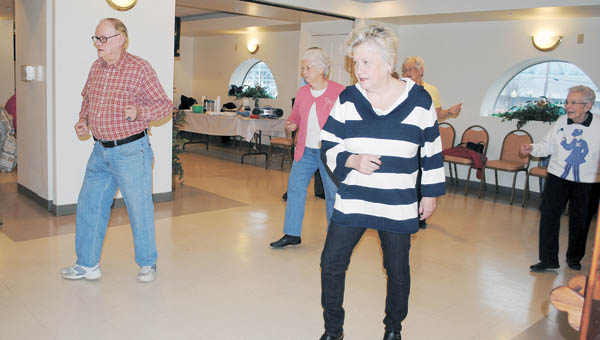 Seniors learn line dances, like County Line and the Electric Slide, at the Ironton Senior Center on the corner of Park Avenue and Second Street, under the instruction of Donna Brumfield.

“Step forward, touch,” “feet together,” “turn,” — those are just some of the instructions Donna Brumfield, line dancing instructor, calls out to her class before the song plays at the Ironton Senior Center on the corner of Park Avenue and Second Street in Ironton.

Brumfield, 81, teaches dances like the Electric Slide, County Line and Billy B. Bad on the first and third Tuesdays of every month. She has been doing it for years and knows 100 different line dances.

“I started teaching it in ’92,” she said. She said when she was taking line dancing classes at the Senior Center at its previous location, she was approached about teaching the class. After some prodding, she agreed.

She taught for four years and then had to take a break, but has been back since April 2010. She teaches about 30 senior citizens on a regular basis, though not all of them can make it to every class.

“It’s good exercise and they socialize,” Brumfield said. “The ones who can’t dance will socialize and have coffee. They just love it.”

Margaret Hood, 82, from Flatwoods, Ky., has been taking the class as long as Brumfield has been teaching it. She said line dancing is perfect for her because she loves good music and gets the additional benefit of exercise. As for a favorite dance, she has a hard time choosing.

Betty Guthrie, 83, from Ironton, has been line dancing since the 1990s and said she gets many benefits from the class.

“The exercise, the fun,” she said. “It’s nice to get together and it’s fun to learn the different dances. You get used to it and look forward to it.”

Linda Burcham, 63, from Ironton, has been line dancing for just a few months.

“It’s exercise, but it’s fun,” she said. “Once you learn the steps you don’t forget them. You might forget the name of the songs, but not the steps,” she laughed. She added that it is also a good stress reliever.

Judy Mills, 66, of Ironton, helps organize the class, keeping the sign-in sheet in order and keeping things running smoothly. She used to dance, but due to health problems, can’t anymore.

The classes are free, but most contribute a monthly $1 donation. They meet on first and third Tuesdays every month from 1 until 2:30 p.m. The classes are open to the public, but Brumfield said it’s mostly suited to those over 50.

“Not the young ones,” Brumfield laughed. “I can’t handle that.”

Brumfield said she has no plans to stop dancing anytime soon.

The cafeteria of Chesapeake Middle School was awash with the color purple Tuesday evening and not because it’s the favorite... read more